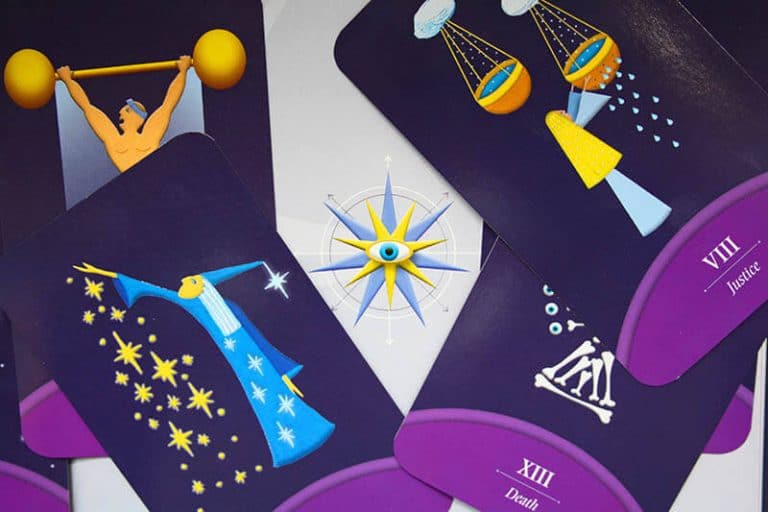 One important bit of information for the long-time tarot student is that with the dawning of the new age in the 21st Century, it had been suggested in the 1970s that reversed cards no longer be viewed as negative. Reversed cards used to be read as the negative meaning of that card. For instance, if the Two of Pentacles was upright, it might mean that the Querent would have to balance their money and budget more in the upcoming months. If it were reversed, it suggested that the Querent would not be able to balance their money or budgets and would get further into financial debt.

I use upright cards’ time frame is “now until six months” and the reversed cards mean that the actual event associated with the card will not happen until “six to twelve months” from the date of the reading. It is also used as half of the time frame. For example, if I were doing a reading for a particular month and I saw reversed cards, it would mean that things would happen in the second half of the time period, in this case, weeks three and four. If it were a day, upright would be from midnight until noon, and reversed would be noon until midnight.
Then to continue with your interpretation, look at the card. Is it a happy or sad card? Blue and yellow backgrounds or skies are usually considered the happier cards, while the gray and black cards are considered to be more challenging.

What emotions or feelings do you intuitively get from this card? Is there a focus on a particular part of the card? How would you feel if you pulled this card out of a deck for yourself? What would you tell your Querent if they had gotten this card? There are no wrong answers, only varied interpretations from experienced tarot readers. You may also do a reading with your intuition and have fun. Spirit will guide you. Just chart how accurate you are with your intuition so you’ll know whether to use it more or less in your readings.

Some Questions to Ask While Doing a Reading

• Are the figures chained or linked to each other in a negative situation?

• Is the main figure in between columns, trees, people, houses, castles, or money — meaning something needs to be balanced?

• What is the balance issue?

• Is the sky clear? What color is the sky? How much of the card is taken up by the sky?

• Are there clouds brewing behind the figure in the card? Are they puffy or streaking clouds?

• Are there mountains in the card? What color are they? Are they to the left, right, or across the whole background of the card from the Reader’s point of view?

• Read the interpretation of colors and memorize them. It will help in delineating the cards.

• What colors are the figures wearing? Are other pieces of clothing covering up other colors?
• Are the figures creating their own problems? (Body parts in any type of water.)

• Is there a sun/moon combination in the card so that the person only sees illusion/delusion or is being deceived in some way?

• Is there a great deal of water in the card expressing an emotional time and sensitivity? The more waves or ripples the water body has, the more emotional and sensitive the issue. What effect does water have in this card?

• Are animals, birds, trees, ships, or anything else BEHIND the individual — meaning there are secrets are going on behind their backs.

• Is there an animal in front of the figures in the card that they are not paying attention to? This could mean there is something going on in direct view, but they choose not to deal with it at this time.

• How many figures are in the card? Remember, the central person in the card whether male or female represents the qualities that the Querent possesses. The figures have nothing to do with gender. What are they doing?

• What is their relationship to the main figure?

• Are they celebrating or does the card look depressed and sad?

• Is there a path leading to new adventures and surprises? What color is the path? Is it straight, winding, or does it just disappear into the past, future, or center (meaning the future is not written yet) of the card?

• Where does the path go and who or what does it pass along the way?

• Are there obstacles to be faced to get to the goal?

• Is the ground rocky (issues and problems) or smooth? Is the ground cement? This is the most secure, balanced, and stable ground one can be on. Is there a combination of many colors?

• Is the figure in between the suits? When a figure is standing in between wands (work or health), pentacles (financial security or loss), swords (thinking or arguing), or cups (love, happiness, and joy), they are actually putting themselves in the middle of a particular situation which is represented in the card. Sometimes, they are the ones causing the problem in that suit.

• Is there a house, castle, tower, or town anywhere in the card? Is it in the background or foreground; past, present, or future? No matter where the castle is in the card, it is the Querent’s job to get to that castle so they may find the love, happiness, prosperity, and joy that they deserve.

With the above information, you should have a good deal to consider and delineate. Take a few moments to look at your spread and compare the notes above with your cards. What is your reaction to the spread?

Below are the colors used in the Rider-Waite deck and their meanings.  Use these colors to help you discover the meanings of the cards quickly and easily.

Harmony, peace, calmness, serenity, or issues relating to communication and the creative process from an emotional standpoint. Compassion, emotional issues, empathy, sympathy, and being a giver.

As if you are in a “fog”, going in some direction, but not exactly sure where you are going because you can’t read the signs to get to your destination, seeing things unclearly, panic attacks, being stressed out, overwhelmed, and easily confused.

Fruitfulness, fertility, abundance, money, happiness, and the creative process. Prosperity and abundance; attaining positive possessions, raises or money being attracted to you.

Grounding, interesting, trying to see things from all perspectives, handling things in a mature manner, being able to suggest alternatives and compromises to many issues.

The highest good of all involved, royalty, being generous, regal, and related to that special place where you are one with the universe. Intuitive, honest, spiritual, metaphysical beliefs, good ethics, and morals.

Honesty, purity, naivety, trust, honor, and issues relating to the heart of deep relationships. Too giving, caring, loving, kind, generous, and honest. Many will try and succeed to take advantage of you. This person does not know how to protect themselves from psychic vampires.  Must stop giving and learn how to receive. Must also learn how to say no.

Spirituality and enlightenment, universal consciousness and wisdom, karmic lessons, relating to one’s spiritual journey or path, handling things on a different level, being guided by God/Goddess or whichever deity you believe in. In the Five of Pentacles, the falling snow against the harsh black background means HOPE in a negative situation.  This is the only card where it is snowing.

Intelligence, using your mind rather than emotions to decide issues, being logical or analytical, issues relating to personal power or work. Seeing things that can easily be analyzed or decided in a logical manner. Deciding what the pros and cons of a situation are and leaning towards the answer that is most beneficial from an intellectual point of view. Planning, organizing, goal-oriented, developing, setting things up, crossing all the t’s and dotting the i’s; generally doing things as a practical and business-oriented person in an organized and goal-driven fashion.

Victoria Anderson is a published author, a renowned lecturer, and a metaphysical teacher, specializing in astrology. Vikki has been teaching for forty-eight years. Trained in numerous modalities; she is an expert in astrology, tarot, and Feng Shui. She has taught in numerous countries throughout Europe and Australia. Additionally, Vikki is a certified hypnotherapist, certified advanced Feng Shui consultant, an Interfaith minister, and is the author of Inner Realm Magazine's horoscope section for almost twenty-five years. A prolific writer, Vikki currently pens monthly horoscopes, numerous blogs, and her most recent book, "How To Be A Tarot Detective" is now available on Amazon.