8 Signs You Are Being Visited by Your Guardian Angel 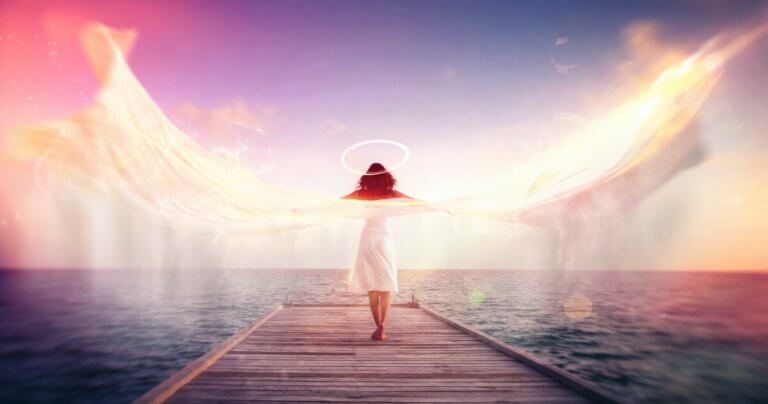 Humans are not alone in this world; everything they do and everything that they say is not limited to the physical world. Certain entities live among us and cannot be seen with the naked eye. Guardian angels are one of those angels who try to help out their fellow humans by giving them signs and voicing their opinions in whispers.

The following article tells us about the various identity signs that a higher being is watching you.

Angels are higher beings mostly made of light and have been defined in different religions in a similar way. Though they may lack the physical manifestation of that shown in movies and different cartoons. But their nature is somewhat similar. They are beings filled with love and gratitude. They are determined to help the people in their day to day lives.

Though they cannot communicate directly with us, they tend to show us different signs that may help us in the long run. Dreams are one of the most important parts of human spirituality. This is the link between the spiritual and outside world. This is the reason dreams have a certain meaning to it. Dreaming about angels is one of the signs that the guardian angel might be looking out for you and trying to smoothen out the path with its love and amazing nature.

Have you ever seen strange lights or orbs, in particular, during your day to day life? For most of us, this might seem a strange experience, but in fact, these are not limited to human eyes as well. These small colored orbs appear in different pictures and videos. Though this might seem like light effects, in fact, these orbs are called as the “vehicles for angels.”

According to some beliefs, these orbs appear due to an angel standing right next to you, which is mostly defined as the guardian angel who is responsible for making the lives of humans easier, by illuminating the pathway for their human partners. Their main purpose is the guard and protects the fellow human from getting hurt or face any damage.

Since the angels cannot completely let you get control of the whole situation by simply showing their true form. A human cannot bear to see the true form with their eyes. For this reason, the guardian angel can apply a certain pleasant aroma to the environment around you. Giving you a clear sign that they are present around you. This sweet-smelling aroma is the guardian angel’s way of making you realize that you are being visited. Though this aroma is not always perfumed. Sometimes people can smell different types of dishes, fragrant flowers, or scented perfumes. All of these things end up being the reason for communication. They might also appear in the shape of angels in clouds, or you would hear certain types of sounds that act as the reason for discussion.

4. Repetition is the Key

As the job of our guardian angel is to help us out in any way possible. But their biggest constraint is helping us in the open form. Sometimes it so happens that they tend to communicate with you using repetition as an act of the discussion. This shows us how much they care about us.

There is a famous saying: “pay attention when things happen in threes.” This shows a clear signal. For example, if a certain name is mentioned three to four times by different people in different situations. You would see that it might be a clear signal from your guardian angel to meet or stay away from that person, depending on the discussion being carried out between two friends.

This shows us that the smallest of the things can be used as a sign by your guardian angel.

As discussed earlier, the guardian angel would do anything to help out their human partner. Different methods were explained, through which they communicate with humans. Though they were indirect patterns, with which some might defer conferring so obviously. As they could be a mere coincidence.

But sometimes it happens that we are searching for something and they immediately appear on a nearby table or floor. A strong sense of feeling arises, that explains the arrival or presence of your guardian angel. This is the most direct method they could employ to make you happier.

6. The appearance of a feather

This seems strange and enigmatic and scary even, for some of us in total. According to Jacky Newcomb, your guardian angel can make you realize of their presence by placing a white feather in their surroundings. This shows that people tend to look out for these kinds of things.

This might also disturb some of us as well in our day to day discussions. And a guardian angel standing beside you would mostly constitute that these feathers are a direct interpretation of the angels suggesting the obvious.

When your guardian angel wants to communicate with you openly, it will give you clear signs, but one must be available to realize them. One other sign that your guardian angel would like to give you is that of the repetition of magical angel numbers, either in communication, calls, or getting your bill or change from the waiter. These numbers are usually “111” or “333”, which are clear signs for wanting of discussion.

8. Tingling on the Crown of the head

It requires a lot of effort before someone can become keen in understanding patterns and making out the messages received. The guardian angels would sometime make a tingly sensation at the top of the crown part of the head. Then this area would become hot, suggesting that your guardian angel just tried to make contact.