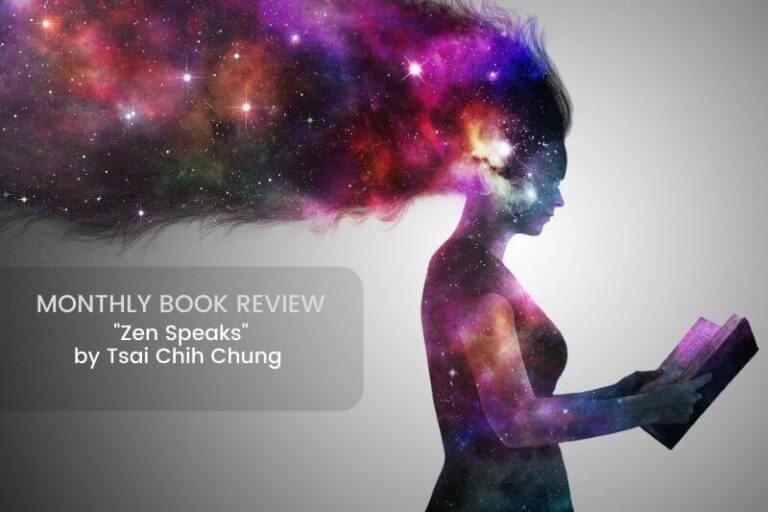 The Pandemic continues to take a devastating toll on human life, economic vitality, and mental well-being.  Unlike destructive events that have a finite and repercussive effect, like the tsunami that struck Japan on March 11, 2011, or the attacks on September 11, 2001, in the United States, the Pandemic continues to impact our lives, persisting over a year after the first infections were reported, with no immediate end in sight.

The ongoing harm and strain of the COVID virus require as much help mentally and spiritually as there is a need for vaccines to help physically.  With this concern in mind, I want to share a book that may be helpful in these difficult times.  It is entitled Zen Speaks: Shouts at Nothingness by Tsai Chih Chung and Brian Bruya.

Zen Buddhism is a life philosophy and way of living that emphasizes meditation to achieve equanimity, which is “mental calmness, composure, and evenness of temper, especially in a difficult situation” (Oxford Languages, Google Dictionary).  One uses and lives Zen in order to be in balance with life and find balance when life is especially chaotic, as it is now under the conditions of the pandemic.

“Finding one’s Zen” is what happens when you are in the middle of an argument or crisis and you are able to become calm and detach from the emotions of fear and anger. I used to teach a thought exercise in my critical thinking classes to try to demonstrate the concept.  The experiment involved four students.

I would have two students face one another tell them to imagine being in an argument that is escalating. And then imagine you observe yourself in the argument while you are having the argument, which is a unique talent of human consciousness.  At that moment I would ask the other two students to come up and stand beside the first two students and look back and forth as the argument unfolds.

Whenever you are in an emotional state and come to realize you are in the emotional state in real-time (not after the fact), you are having a “Zen” moment.  Training yourself to “step outside” your emotions is key to living a Zen Buddhist life.  Or, at least, attaining the skill to use Zen thinking to help you avoid being “trapped” in your emotions.

Many, many books have been written on Zen Buddhism; some truly excellent ones are available, like The Miracle of Mindfulness by Thich Nhat Hanh and Zen and the Art of Archery by Eugen Herrigel.  This book is unique because it uses cartoon vignettes to share and show Zen principles.

Zen has been described as the greatest “nonreligion” in the world.  A wholly Chinese invention, Zen has evolved into a traditional way of life for those free spirits who come to understand that life is everything and nothing.

Zen Speaks is an illustrated adaptation of selections from various early Zen Buddhist classes.  Collected and popularized by the bestselling Chinese illustrator Tsai Chih Chung, the book includes over one hundred Zen tales (koans) for the reader of today, bringing to life the spirit and philosophy of Zen, its insights, its rich unfolding of spiritual beauty and peace, and its unveiling of the ineffable charm of simplicity and everyday life.

Below are some sample pages from the book:

This book has a 4.5-star rating from 56 reviews (at the time this article was written), here are three:

I fell in love with this book when I was 13. The Zen teachings have helped me to understand myself and the world around me. I’m so glad to have encountered this book at such a young age. Buy this for any introspective creative children in your life. (Bevrocktagon)

Beautiful, meaningful book. It is basically a bunch of “koans” turned into brief comics. Given the inherent irreverence of Zen Buddhism and its emphasis on reducing the number of words used to cut through the truth, I think comics are a perfect vehicle for these koans. I often re-read a random clip I saved right after a meditation session at home and find it great to use for pondering. (Francisco F.)

Zen Speaks is a staple for our family conversation, with comics often providing the perfect Zen philosophical teaching for a moment, decision, or situation. Accessible, deep, and good for beginning to share Zen Philosophy with the whole family, but I used it for years before we had kids. (CA Ives)

I do recommend this book.  In fact, I used to assign this book in my “previous life” as a college instructor at the University of North Carolina at Greensboro, teaching English 102, critical thinking.  The Zen Koan is one of the simplest and most powerful mind tools you can use in life.  Having a book filled with them and presented in such a creative way is invaluable.

Since this book has gone out of print, it can require some effort to find a copy, but it is well worth the search and the expense.  This book is relevant in times of order and chaos, but especially welcome when life is distressing and you can use some insight, humor, and wisdom to keep going.