The best Movies for Gemini 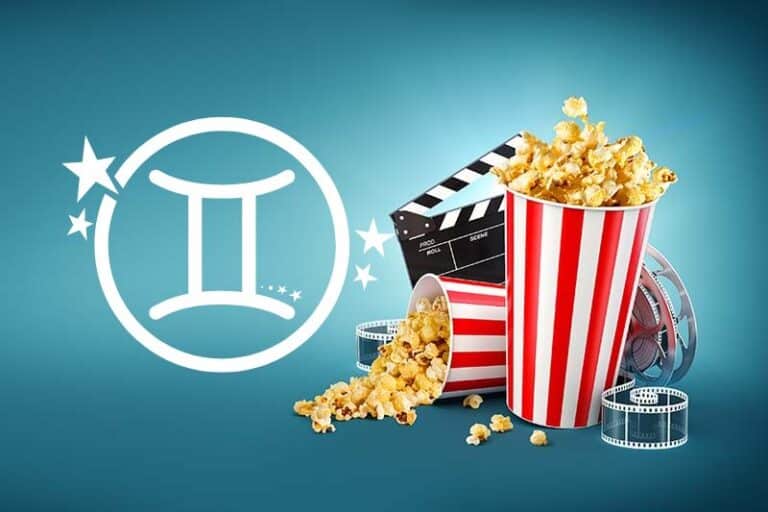 The plot and characters exemplify the qualities each sign would enjoy. This article will be about the movies for Gemini.

Gemini is the mutable air sign of the Zodiac, so movies for this sign should include clever dialogue, imagination, and numerous plot twists, with storylines tied to ensemble casts, international settings, and diverse characters. Mercury rules this sign and focuses on the joys of the mind, so movies about differing points of view and psychological development will appeal to people with this Sun sign.

Quick synopsis from IMDB: “Chaos ensues when a man tries to expose a dark secret regarding a recently deceased patriarch of a dysfunctional British family.” No culture does dysfunction quite so well as the British, able to play off the presumed need for constant and unassailable decorum that defines British high society.

Gemini is a sign that loves quick wit and misdirection; this film has plenty of sudden shifts and out of left field moments. The comedy is clever, even crass, which will appeal to the Mercury ruled Gemini, who would not consider anything off limits so long as the joke lands. The multiple characters, nicely defined, and oh-so funny, will be a treat for the Gemini viewer.

Quick synopsis from IMDB: “The presidencies of Kennedy and Johnson, the Vietnam War, the Watergate scandal and other historical events unfold from the perspective of an Alabama man with an IQ of 75, whose only desire is to be reunited with his childhood sweetheart.”

Starring Tom Hanks in his Oscar winning role as Forrest, along with Robin Wright and Gary Sinese, the movie is considered one of the touchstones for the various time periods the character lives through.

The story takes numerous twists and turns, focusing on the core relationships that mark Forrest Gump’s life: with his mother (Sally Field), childhood sweetheart (Robin Wright), and Vietnam commander, Lieutenant Dan (Gary Sinise). The journey through the historical periods from the 1950s to the 1980s will also be of interest to a Gemini viewer, who appreciates any stories ability to capture a time period with authenticity.

Starring Leonardo Di Caprio, Joseph Gordon-Levitt, and Elliot Page, the IMDB synopsis is “A thief who steals corporate secrets through the use of dream-sharing technology is given the inverse task of planting an idea into the mind of a C.E.O., but his tragic past may doom the project and his team to disaster.”

Most of the movie takes place in other people’s minds. Reality gets warped in ways that will perfectly attune with Gemini’s interest in all things mental. The science fiction setting happening inside the mind will certainly keep the Gemini viewers interest all the way until the end, which is no small task!

The movie centers around Mr. Peabody, a super-intelligent dog, who adopts a boy he names Sherman. They time travel together so Mr. Peabody can teach Sherman about history, but trouble ensues when Sherman takes his grade-school nemesis back in time, where they cause a rift that must be repaired, or the entire world will be destroyed.

The movie has the kind of diverse scenes that will help keep a Gemini child entertained. Afterall, what better way to learn about history that time travel, and who better to learn it from than a brainy dog. The dialogue is fast and funny, and the action sequences are some of the best in animation. Also, a wide range of characters populate the film, adding a high number of different interactions that will keep a Gemini entertained.

Starring Keanu Reeves, this movie was as groundbreaking when it was released as Star Wars was in 1977. The movie industry literally shifted because of the special effects on this movie, which still hold up today. The IMDB synopsis states, “When a beautiful stranger leads computer hacker Neo to a forbidding underworld, he discovers the shocking truth–the life he knows is the elaborate deception of an evil cyber-intelligence.”

Yet another “reality is not what it seems to be” movie in which reality is really not what it seems to be. Human bodies provide the power source for a computer and cybernetic world, where people live out their existence inside the Matrix until their bodies expire in the real world. Neo, the main character, is brought out of the Matrix and into the real world to help try to save the last remaining humans from final destruction by the cybernetic overlords. As you might guess, there are numerous twists, all of which will keep a Gemini enjoying every moment of the movie.

Starring Christian Bale, Hugh Jackman, and Scarlett Johansson. The IMDB synopsis reads, “After a tragic accident, two stage magicians in 1890s London engage in a battle to create the ultimate illusion while sacrificing everything they have to outwit each other.” The story interweaves multiple layers which will leave you guessing up until the very end.

Why Gemini Will Love It.

Magic! Pure and simple, the movie revolves around magic, how to perform it, and what it means to produce and pull off the ultimate illusion. The Gemini viewer will appreciate the well-crafted and well-acted story that has numerous twists and turns that are so carefully hidden that the curious mind of the Gemini will be more than satisfied by the end.

If you select these films to watch with your Gemini friend, partner, or lover, they will be pleasantly impressed with your choices.