The Synastry of the Notorious B.I.G. and Tupac Shakur

Home » Blog » Astrology » The Synastry of the Notorious B.I.G. and Tupac Shakur 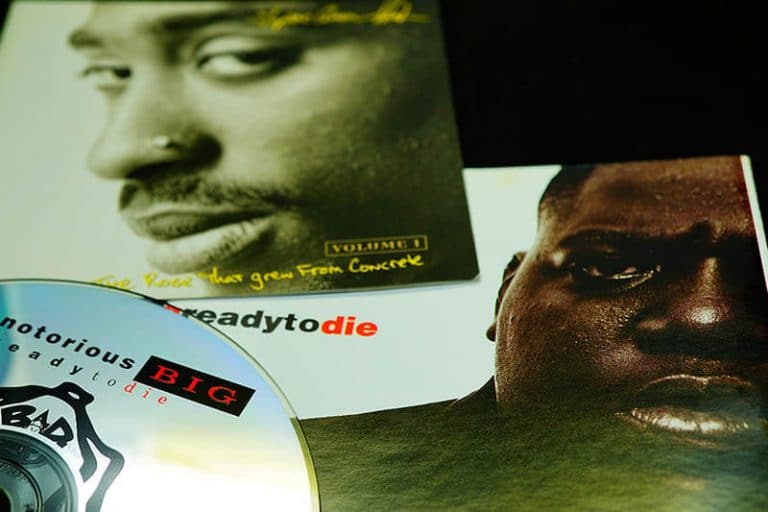 “Look in my eyes and you’ll find peace / A Gemini, so you really blow my mind freak, come on.” – Tupac

“Who they attractin’ with that line / ‘What’s your name? What’s your sign?’ – Biggie

Though both used astrology in their lyrics, Biggie shows his skepticism of it with the above line whereas during the outro of ‘Let ‘Em Have it’, Tupac goes through all the signs, calling himself the “zodiac f–ker.”. Despite only reaching a quarter of a century in age, Tupac is still seen as one of the most important rappers of all time, much like his contemporary friend turned foe, Biggie who died at 24.

Tupac and Biggie first encountered each other in 1993, in Los Angeles. Biggie asked a local to introduce them and got an invite to Tupac’s house, where they ended up eating steaks together. From that day on, their friendship blossomed. The most significant aspect between their charts is the double whammy Saturn aspects. Tupac’s Saturn conjuncts Biggie’s Sun. A conjunction in astrology is when two different planets link up together in the same sign. Even though there was only a year between them, Tupac being the ‘Saturn’ person here would be seen as the elder figure, the father, teacher (all themes of Saturn). This is evidenced by the fact that Biggie asked Tupac to manage him. Even though Tupac didn’t take Biggie up on his offer he did take him on in a protegee role, grooming him and also schooling him on his lyrics.

Biggie had an amazing chart for writing and communication having his Sun (Gemini) and Moon (Virgo) ruled by Mercury. In mythology, Mercury rules over day-to-day expression. He had a very strongly placed Jupiter, emphasizing his need to communicate on a global level which he did achieve. Tupac can be seen to have played a strong role in his success. When they first met in 1993, Tupac was already famous however Biggie was little known outside of New York.

Sun, Saturn are long-lasting bonds, and they are indeed bound together still and it is rare that one mentions one name without thinking of the other. Biggie’s Saturn was also impacting Tupac’s Venus. This would have provided Tupac with a serious desire to provide a secure foundation of loyalty, responsibility, and commitment to their relationship. Their Saturn bonds kept them together just as fiercely as when they were friends and also enemies.

Transits and Transition in US Presidency

7 Signs You Are a Stereotypical Scorpio