Skip to content
Home » Blog » Astrology » Synastry Astrology: My Moon to Your Moon 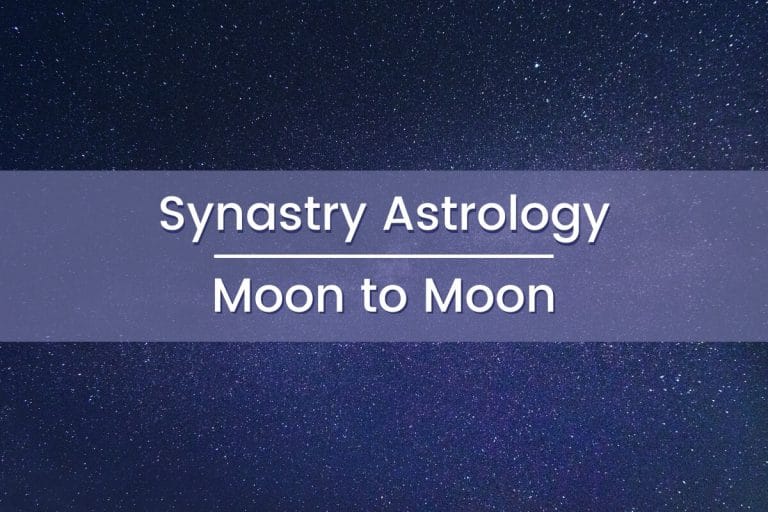 This article is the first of a series to look at the interaction of points between two people and explain how to interpret the dynamics.  We will start with the Moon, not the Sun because of how we “feel” about a person is usually the first and lasting impression.

These were randomly generated charts. As you can see all the same points appear in different signs throughout the two charts.  When we look at them together, we have the chance to see the kinds of energy dynamics that will take effect when they form a connection, whether as lovers, friends, or family members.

A fair amount of my work as a professional astrologer involves relationship charts reading, and I always start with the Moons.  Often clients or people I meet in public, who find out I am an astrologer will say something like, “I am a Leo and read somewhere that I should never date a Scorpio” or “I am a Leo and should only date fire and air signs, like Aries or Gemini”.  Then they ask, “Is that true?”

While it is true that the Sun sign is very important, when it comes to romance or any other emotionally charged relationship (like a friendship or with a family member), it is the Moon that plays the most significant role.  The Moon, after all, is how you prefer to give and want to receive love.  You keep your Moon hidden until you feel safe enough to be vulnerable.  If your lunar energy flows with another person, the two of you can have a sustained relationship.

Please keep in mind that flowing energy is not the same as positive energy.  Flow occurs when two points aspect or align with each other in certain ways and close to the same degree.  For example, if I have my Moon in Libra at 21 degrees and you have your Moon in Libra at 18 degrees, our Moons will be conjunct and easily merge.  That is great if we are both emotionally healthy, but not so great if one or both of us is carrying and dealing with a lot of emotional baggage.  And no matter how problematic the emotional energy between us, the flow will keep us together or strongly drawn to each other whether the relationship is healthy or not.

Below I have marked the Moons from the two charts:

The Moon for Person B is in Aries and the Moon for Person A is in Libra.  They oppose each other by sign, but not degree.  To oppose by degree, they would need to be within 6 degrees of the exact opposition, and they are just over 7 degrees apart.

Let me break the “4th Wall” for a moment and say that Astrology is not an exact science, or really a science in any rigorous, mechanistic Newtonian sense.  Some astrologers will give the Sun and Moon orbs of influence of 10 degrees.  Hellenistic (classical) astrology would disregard the orbs of influence and just say they are in opposition.  I do think proximity by degree orb matters, but I also use quite a large number of points (23 in the examples here) in my charts, so I prefer to tighten the orb of influence for the luminaries (Sun and Moon).

I like to describe the opposition as a seesaw that has two people on each end that are attempting to get into perfect balance.  In real life, the seesaw is constantly going up and down, and sometimes the imbalance is significant and persistent with one end up and the other end down.  Regardless, the two energies are trying to get into balance; that is the “effort” they keep making around each other.  If both individuals are healthy, then a great balance might look something like this scenario.

Consider something as simple as going out to dinner.  Aries will prefer to initiate and Libra will want to be part of the decision-making process, with enough power to sway Aries, not simply go along.  Aries will start with many suggestions, but they all need to be honest ones the Aries would enjoy, but there definitely needs to be more than one for the Libra.  Once dinner out is an option, Libra can add to the choices, and its okay for Aries to say no to the ones they do not like.  Aries can be too quick to act and Libra too slow, which is why the opposition benefits them both.

If one of the individuals is living in the “shadow” of the sign, then the Aries will selfishly want to have dinner where they want to regardless of the feelings of others.  The Libra will vacillate incessantly, which is its shadow expression.  A health opposition can bring collaboration and joyful exploration together, or extreme frustration.  Keep in mind that the tighter the orb of influence the more likely the pair will stick together regardless of positive or negative expressions.

Finding your Moon in your Chart

You can certainly contact me for a chart reading and I can give you a comprehensive reading of your entire chart and tell you where the Moon is.  But you can also find it by going to an online ephemeris and looking up the Moon by the sign on the date of your birth and at the time.  Keep in mind that the Moon changes signs roughly every day and a half, so it can change signs during a day, which is why a birth time is so important.

Join me next month when we look at Mercury to Mercury and how you communicate with each other!