An aspect is a term used in astrology to describe a special angular relationship between two points on the 360-degree astrological wheel. The strongest aspects are “hard”, and these include the conjunction (0 degrees apart), the square (90 degrees), and the opposition (180 degrees). Next strongest include the sextile (60 degrees), the trine (120 degrees), and the inconjunct (150 degrees). Minor aspects include: semi-sextile (30), semi-square (45), and quintile (72). Each aspect performs are “service” between the two points.

This article will look at the semi-sextile because there is an unusual trio of points all sharing a semi-sextile relationship among the signs Pisces, Aries, and Taurus.  The points involved are Lilith, Chiron, and Uranus, respectively. The semi-sextile “indicates a mental interaction between the planets involved that is more sensed than experienced externally” (wiki – Astrological aspect). The event of three points lined up with conjoining aspect is worth a look.

Lilith, or the Dark Moon, represents what we are unyielding about, what comes from deep within that is hard-wired into our emotional states.  Where this point resides in our chart, we will not give in. Lilith moves through a sign approximately 9 months at a time.  While in Pisces, we will be unyielding about our beliefs. If we have delusions or addictions, we will not release them while Lilith resides here.  Her work forces us to confront what is most deeply held, and often our irrational fears or bravado.  When attached to another point by aspect, this energy can give us endless reserves of perseverance or obstinance, depending on whether we are acting with the positive energy of Lilith or her shadow.  Lilith permanently entered Pisces on May 4, 2019.

Chiron represents our wound to heal in this lifetime.  Wherever Chiron ended up in our chart, therein lies our lifelong wound to address and work to overcome.  Chiron has a very unusual orbit, one that takes it inside Saturn and outside Uranus.  For this reason, it does not stay in signs in a consistent way as it makes its 50-year journey around the Sun. It should average roughly 4 years per sign, but it spent 8 years in Pisces.  While in Pisces we were needing to work on a wound of faith.  Now that it is in Aries, we must work on the wounds of selfishness.  When attached to another point by aspect, this energy will either do wounding or healing work depending on the circumstances and spiritual needs of the individual. Chiron permanently entered Aries on February 18, 2019.

Uranus represents awaking and wisdom through revolution and authentic behavior. It arrives with a shock, to the system or situation.  Wherever Uranus landed in your chart, you are part of a group seeking wisdom and authentic expression through the sign of your generation (in my case Uranus was in Virgo in 1968).  Uranus completes its cycle around the chart every 84 years, moving through each sign roughly every 7 years.  While in Taurus we will see which radical ideas that emerged while Uranus was in Aries will actually stick.  Will we be buying groceries with bitcoin; will my local car dealership start selling driverless cars; will extreme weather systems “shock us” teach us wisdom?  When attached to another point by aspect, this energy will revolutionize the energy of the relationship between the points. Uranus permanently entered Taurus on March 6, 2019.

On June 24th Lilith, Chiron, and Uranus will all be the end of the 5th degree of Pisces, Aries, and Taurus respectively.  They will connect by semi-sextile, integrating unyielding, wounding/healing, and awakening energy through the higher consciousness, the assertive self, and needs/values.  Using the time of 7:30 am and a location of Cary, North Carolina, I have cast a chart with just these three points and the 1st House ruled by Cancer.  See below: 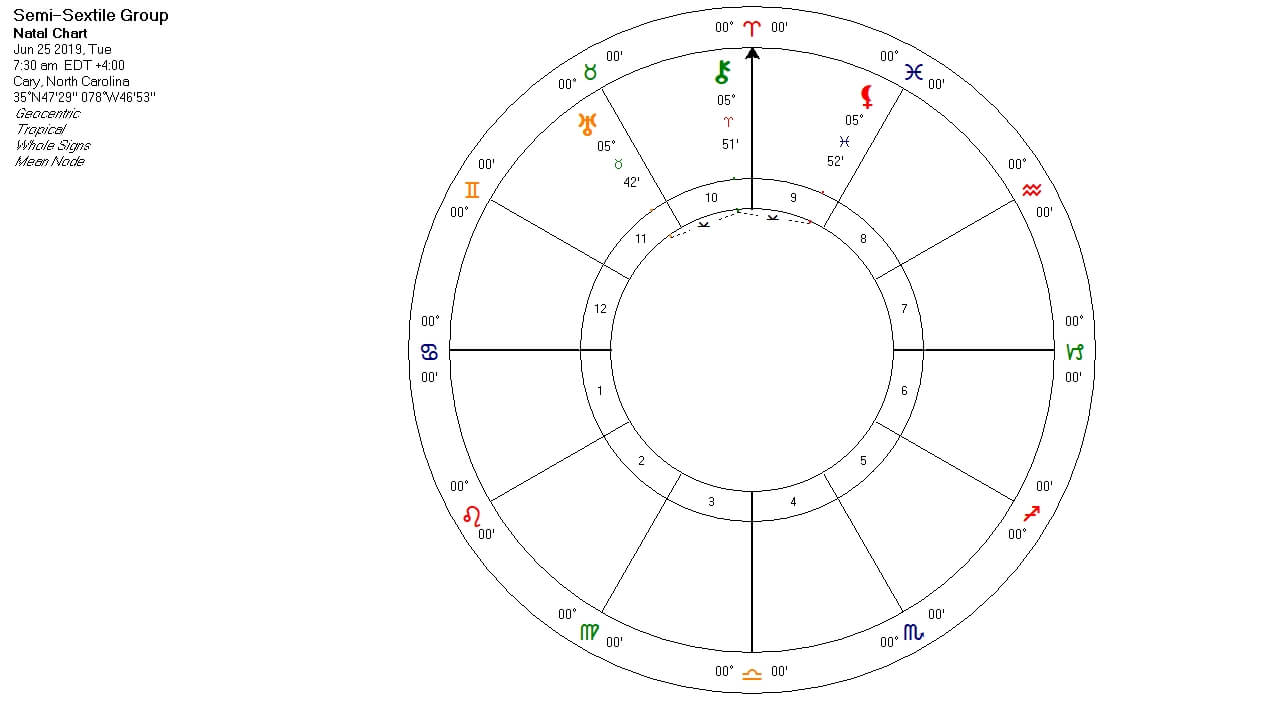 The impact of this event will last over several days, beginning June 4, when Lilith will get within less than two degrees of Chiron.  The energy will begin to fade on July 14 when Lilith gets over two degrees past Chiron.  Chiron will actually go retrograde during this period on July 8, speeding up the separation.

So, what is the significance of this trio being connected by the semi-sextile? The semi-sextile energy is described as “one of building and potentiating each other gradually” (wiki – Astrological aspects).  The nature of the aspect provides an opportunity for the points to “learn from each other”. Putting them all together, I would say that we need to look at our unyielding beliefs, which are either wounding or healing us, and we must take appropriate action swiftly and with wisdom to change if we are dealing with a wound while making the healing an established part of our behavior going forward.

If you have read my other articles on Ask Astrology, then you know that I always promote looking at astrology with a fully rendered chart in hand.  You are so much more than your Sun sign.  A fully rendered chart, cast with your birth date, birth location, and birth time will allow you to orient this configuration in terms of the Houses ruled by these signs in your chart.  In my case, I have Scorpio rising, so Pisces rules my 5th House of Creativity, Aries my 6th House of Service, and Taurus my 7th House of Partnerships.  I have several points in each sign/house, but the most significant for me is Venus in Aries, which is at the same degree as this transiting Chiron in Aries (5 degrees).

During this period of time I need to look at my “unyielding” beliefs about children, romance, and my performance in life (5th House); see how those beliefs may be wounding or healing me with regard to the service I provide others through my skills as a spiritual adviser (6th House); and then understand what new, authentic actions I need to take with people, both as clients and colleagues to improve and succeed with those relationships (7th House).  This energy will work subtly because the aspect is connecting energies that are “side-by-side” rather than part of one of the major aspects.

Making this configuration conscious can offer you an opportunity to do some essential transformation work that can awaken you to a more authentic version of yourself.