The Numerology of Cleopatra 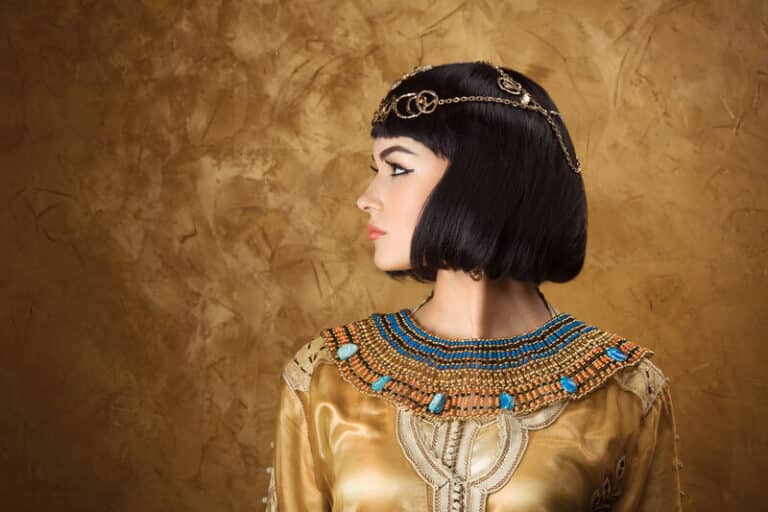 Cleopatra VII Thea Philopator, known simply as Cleopatra, was Queen of the Ptolemaic Kingdom of Egypt. She was born in 69 BC, and there is no month or day given for her birth.

She was a descendant of Ptolemy I Soter, the founder of the Ptolemaic dynasty, who was a Macedonian Greek general and companion of Alexander the Great. This article will explore her numerology to see how she expresses her numbers.

Since we only know the number of the year Cleopatra was born, 69, her total is 15, which reduces to 6.

An individual that has life path number six is nurturing and supportive. Therefore, they have passion and energy to help others, support their community, and teach. Their personality develops through their efforts to learn about the world by being of service to others.

As service people, they embrace compassion, empathy, and attentiveness. So, they become successful through the support of others as matter of course and in times of need. Since they serve to succeed in life, they overcome challenges thrown in their way by helping people who can overcome the challenges and provide assistance to others.

It is not uncommon to find the number 6 in ruler’s numerology, since it is a number of service, and even the most tyrannical rulers often believe they are serving the greater good, or what is best for the people.

The “true” active number is the given birth name. Even if you legally change your first name, the core Active Number is the birth name given to you by your parents. A legally changed name is more powerful than a nickname. And any name used to identify a person in the world is an Active Number. Cleopatra totals 37, which totals 10, which reduces to 1.

An individual that has an Active Number 1 is a natural-born maverick. Therefore, they like to go first, try the ride before everyone else, and take the first bite! This person will speak up and stand out. A child with a 1 first name will take off towards something they want or head in a different direction than the rest of group. Either that or the rest of the group runs along after the child with the 1 first name.

Essentially, you inherit numbers from your parents. Most often, the father’s surname is the one that dominates and is known out in the world. The mother’s surname often becomes her middle name after marriage, when she assumes the surname of her husband. Cleopatra’s last name is Philopator, which totals 58, which totals 13, which reduces to 4.

An individual that has a Heredity Number 4 inherits establishing from one or both parents. The person must determine how to understand number 4 energy through the influence of the parent. That influence may manifest as support or suppression. In other words, the child gets encouragement to act responsibly and work hard or gets spoiled. Either way the child learns the lesson of duty and commitment from the parent or despite the parent with last name that is the number 4.

The Soul Urge Number is the total of the vowels in a name, specifically the full birth name. The Soul Urge is like an energy charge within the numerology of a person. The number of the Soul Urge “powers” the Destiny Number. In Cleopatra’s case, her number is 41, which reduces to 5.

In Cleopatra’s case her Soul Purpose Number is the total of her Life Path Number 6 plus her Destiny Number 3, which totals 9, the Counselor. With a 6 + 3 combination, she is here to “share creatively as a service to others”.

Cleopatra is interesting because she has no duplicating numbers. And it is worth noting that she is famously known for her relationships, to Caesar and Marc Antony, but she does not have the number 2 in her numerology. It is possible that the missing month and day of her birth would yield that number, but we know her based only on the year of birth. In truth, aside from the stories attributed to her through literature and art, her rulership was nothing spectacular. She does, however, fulfill her Destiny Number by being the source of one of the greatest romantic stories of all time.