The Numerology of Alexander the Great 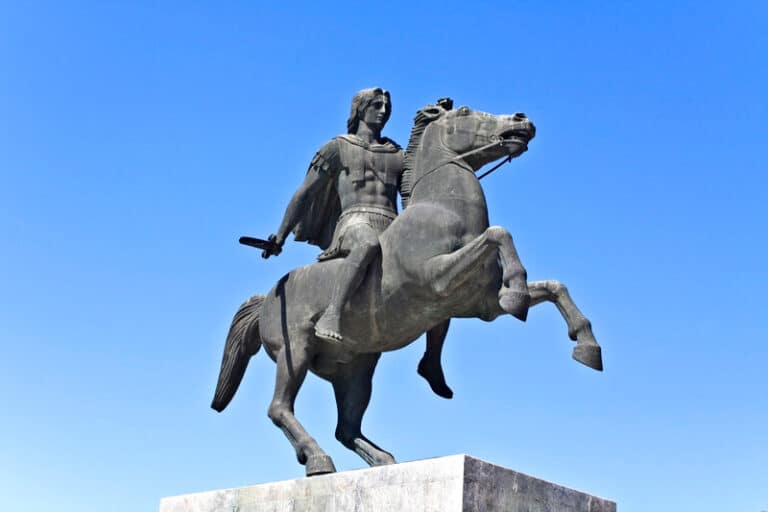 Alexander III of Macedon (born in July 356 BC) is best-known as Alexander the Great. He succeeded his father, King Philip II, to the throne at the age of 20. Once king he conducted military campaigns across Greece, Africa, and as far as India.

By the age of thirty, he created the largest empire of that era, stretching from Greece to northwestern India. He was undefeated in battle and died of disease or poisoning around the age of 32.

An individual that has life path number three is creative and romantic. Therefore, they have passion and energy to bring creative ideas into the world, problem-solve, and imagine. Their personality develops through their creative activity.

As creative people, they embrace new ideas, change, risk, and opportunity at a much higher level than any other number. So, they become successful through finding and filling needs in society. Since they create to succeed in life, they overcome challenges thrown in their way by thinking outside the box or building a new box.

In Alexander’s case, he would represent both the creative and hard work aspects of this number through his military skill and success. He was a military commander ahead of his times, which led to his undefeated record in all his battles as king, from 20 years old until 31 or 32.

His Life Path Number and Destiny Number are both 3. Since he was known by a ruling title and famous name, it is worth looking at the numerology of Alexander III, King of Macedon, and Alexander, the Great.

This name and title total 105, which reduces to 6. An individual that has a Destiny number six attracts nurturing and caring people. Therefore, they learn how to help others find ways to support their community and share what they know that will help others.

They understand the value of service and want others to know how to serve. Their innate understanding of compassion, empathy, and attentiveness provides guidance to others who want to follow this life path. Destiny wants them to show people the power of serving and the grace of duty.

This name and title total 78, which totals 15, which reduces to 6. The same number as his other title, Alexander III, King of Macedon.

You lead into life with your first name, which is why its numerical value is your Active Number. Some people use their given first name, some take on a nickname given to them by a family member or peer, and some people choose a nickname or even an alternative name. The “true” active number is the given birth name.

Even if you legally change your first name, the core Active Number is the birth name given to you by your parents. A legally changed name is more powerful than a nickname. And any name used to identify a person in the world is a variation of an Active Number. In Alexander’s case his active number is 39, which totals 12, which reduces to 3, the number for creativity and hard work.

An individual that has an Active Number 3 is creative and dynamic. Therefore, they enjoy learning, problem-solving, expressing ideas, and working creatively. A child with a 3 first name prefers the chance to do creative activities and be active as much as possible throughout the day. When focused, they accomplish amazing feats, but if uninterested, no threat or reward moves them.

There is no hereditary number for Alexander. He did not have a surname from his father Philip.

The Soul Urge Number is the total of the vowels in a name, specifically the full birth name. The Soul Urge is like an energy charge within the numerology of a person. The number of the Soul Urge “powers” the Destiny Number. In Alexander’s case, his number is 12, which reduces to 3.

An individual that has a Soul Urge Number 3 draws energy from creative effort. Therefore, they operate with a need to create to generate energy. These individuals are often imaginative, visionary, and clever. Accepting that you need to be creative to get what you want and to get things done will help you be more successful in your relationships and endeavors.

An individual that has a Personality Number 9 presents as wise to others. Therefore, others see them as either altruistic or a “push over”. People who value wise counselors will expect a Personality 9 to fulfill that role in life. Do not be surprised if people treat you as someone who wants to listen to their worries and problems, even if you want someone to listen to you.

In Alexander’s case his Soul Purpose Number is the total of his Life Path Number 3 plus his Destiny Number 3, which totals 6. With a 3 + 3 combination, he is here to “serve through creativity and entertainment”.

What is most interesting about Alexander’s numerology is the factor of 3 in all his numbers. He has four 3s, a 6, and a 9. His Soul Purpose Number appears unusual considering his role as a military leader and conqueror.

If you use the Destiny Number 6 for Alexander III, King of Macedon, and Alexander, the Great, the Soul Purpose becomes 9, which changes his energy to “share through service creatively”. It is difficult to know his creative energy outside of the battlefield, or his philosophy as a ruler. Many profess ideas of brotherhood while acting as tyrants.

One might expect a great leader to have at least a 1 or 8 in his or her numerology, but that is not the case with Alexander.