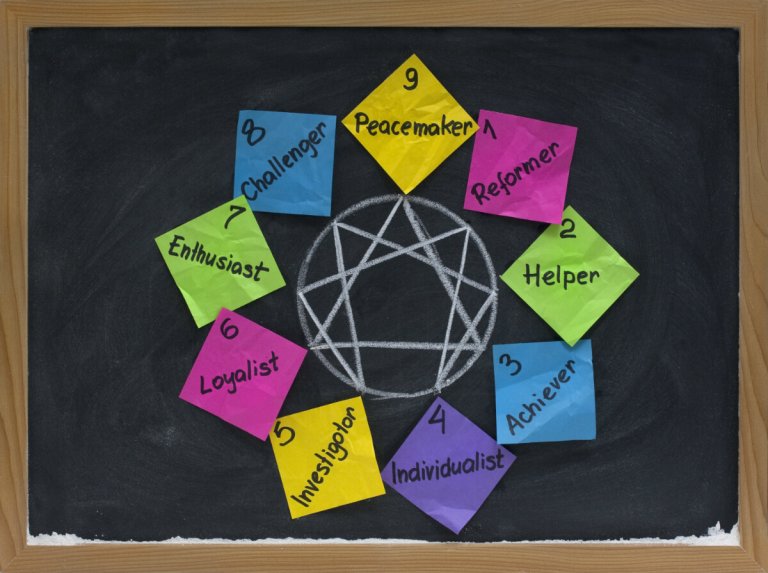 The Enneagram means 9 as the ennea part in Greek suggests and the gram is a drawing or a model. This model has been studied for a long time and over the decades it has gotten a lot more attention and people are gravitating to it.

The Enneagram shows 9 different personality types that each one of us possesses. Additionally, this has been a tool for helping people get a better understanding of what works for their personality type, and what doesn’t work. This model has given people the ability to understand themselves better which leads to self-improvement, and it has given them a way to understand others and why they behave the way they do. In other words, the Enneagram helps bring more empathy. And what does this have to do with astrology? Everything! Below you will learn about the 9 personality types on the Enneagram model and the planets and signs it is associated with. Let’s now start with type 1 on the Enneagram model and learn about that one.

Type 1: The Reformer – Ruled by Virgo And Mercury

This personality type is called the reformer for a reason as those who fit in this one are those who are very detailed-oriented, and only want things to be organized and in order. They don’t like anything less than perfect which is why the other name for this type is the perfectionist. Those who have this type are known to be very nitpicky and only want to go by the rules because it is the proper way of doing things.

The planet and sign that rule this personality type is Mercury and Virgo which is not a surprise since Virgo is about doing work, providing a service, and being detailed-oriented and analytical.

Type 2: The Helper – Ruled by The Moon and Cancer

This type is called the helper for a reason as those who fit in this mold are the types to want to literally help others in need. And they would drop everything they are doing to help them. This can mean they will be there for a friend in need while they put their own plans on the back burner, and a stereotype for this type is those who fit this mold are baking cookies for those just to make them feel better. However, they are overly emotional too and become upset if they feel their efforts to help haven’t been appreciated. The Helper is associated with the Moon and Cancer as this is an emotional and maternal planet and sign.

Type 3: The Performer – Ruled by The Sun and Leo

Those who have this personality type are called either the performers or achievers. They are highly competitive and want to be the best at what they are doing which can go for anything whether it involved their career or their appearance. They want to be seen as the best in their social circles and are striving to keep climbing to the top no matter what it takes. They want to be the best at what they do because it helps feed their ego and the planet and sign that is associated with this type is the Sun and Leo.

The Performer wants to be in the spotlight because they want to be recognized for being the best at what they do.

Type 4: The Individualist – Ruled by Neptune And Pisces

Those who have this type are incredibly creative and intuitive, however, they have a tendency to be overly emotional and melancholic. They feel very different and are indeed unique which they see as both a curse and a blessing, and they often call themselves misfits.  They tend to make mountains out of molehills. They can be quite irrational as far as when they are at their lowest and believe that others are purposely starting to hurt them. The planet and sign that is associated with this type are Neptune and Pisces.

Neptune is intuitive, creative, but also represents delusions and Pisces is about the love of art and psychic ability. However, it is known that being irrational is what is associated with the sign.

Type 5: The Investigator – Ruled by Uranus And Aquarius

Those who are of this personality type are the ones who are detached and are constantly needing intellectual stimulation. They never want to be in the way and are constantly observing others from a distance. They are the ones who are frequently researching anything that they find interesting. The planet and sign that rules this personality type are Uranus and Aquarius due to the fact that it is detached by nature, innovative, and intelligent.

Type 6: The Loyalist – Ruled by Saturn And Capricorn

Those who are of this personality type are known to be anxious by nature and limiting as far as who and what they will trust. However, once they find a reason to trust a person or a belief system, they are attached for good. They are very cynical by nature and the planet and sign that rules this type are Saturn and Capricorn. The reason for that is because the Loyalist type is restrictive by nature.

Type 7: The Enthusiast – Ruled by Jupiter, Sagittarius, and Pisces

This type is known to be extremely positive, outgoing, and adventurous. They are never like to stay in the present as they are always looking forward to some potential fun. They tend to take on a lot of roles because they feel unstoppable and are really excellent multitaskers.

They are enthusiastic about life, and this is why this type is ruled by Jupiter as well as Sagittarius. The nature of the planet and the sign is all about expansion, seeking adventure, and positivity. Pisces also rules this type because of the fact that they tend to take on more than they can handle as it is about lack of boundaries – which is what Pisces also represents.

The challenger type is the ones who are in control and will not take orders from anyone else. They are powerful and have a tough exterior. They are full of energy and are always motivated to do something and will not back down when it comes to being faced with challenges. Those with this type would take any challenge by the horn and show it who is boss.

And they also have a fiercely protective side too for the ones they care about and for the ones who they see are vulnerable such as children, the elderly, the sick, the disabled, and animals. The planets that rule this type are Mars and Pluto due to its energetic and powerful nature, and the signs that rule this type are Aries and Scorpio. Scorpio is the sign that rules extremes and being overprotective is a trait as well towards the ones who need it.

Type 9: The Peacemaker – Ruled by Venus, Libra, and Taurus

Those who have this type are those who want to make peace with everyone, and also do what they can to avoid conflicts. They have a hard time saying no, and also have a hard time making decisions. Those who are of this type are kind-hearted but can seem somewhat lax and stubborn as they are set in their ways. The planet that rules this type is Venus due to the fact that it is a sociable and peace-loving planet. The signs that rule this type are Libra and Taurus. Libra is about fairness and wanting peace, and Taurus is also the sign that rules stability which is what this type is seen as – stable but also are stubborn.

Even though the personality types of Enneagram match the planets and the zodiac signs do not mean that just because you are of one particular sun sign that your personality is the matching type on the Enneagram. Remember, your moon and rising sign play a role in what your Enneagram type is as well. With that said, you would be someone with an Aries Sun and a Pisces moon and be more of a 4 than an 8 which also depends on the rest of your personal horoscope as well.