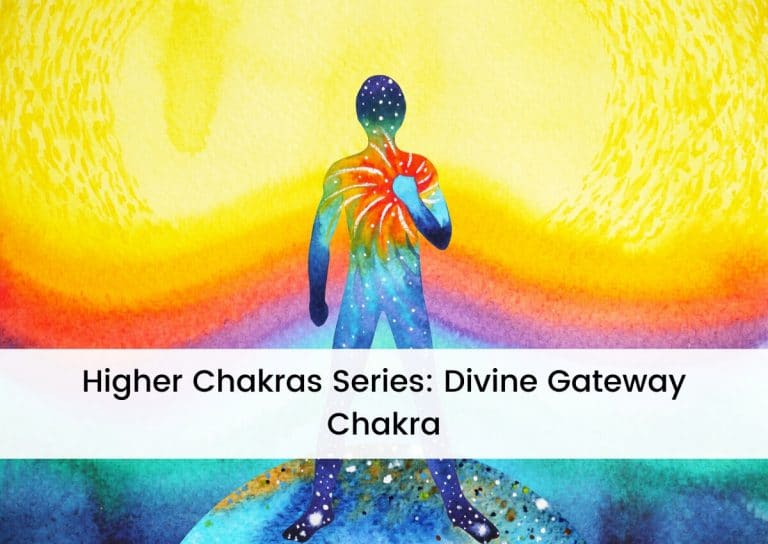 As you travel the ascension pillar of the white light of the Higher Chakras, the Divine Gateway Chakra is your top destination in the 12 Chakra System. Depending on how you view the Higher Chakras, you might say the Divine Gateway Chakra is the highest rung of the “spiritual ladder” of ascension. Certainly, at this level, it is said that the dimensions of time and space are displaced with instant manifestation. Teleportation, telekinesis, and bilocation (existing in two places at once) are all obtainable at this level. While many may aspire to reach the Divine Gateway Chakra, not many actually do, at least not in a controlled way, as it takes a great deal of determination and discipline to do so. However, it is said that exceptionally gifted psychics can attain this level more easily.

Where is the Divine Gateway Chakra Located?

Why Is the Divine Gateway Chakra Important and What Can It Do for You?

In the ancient eastern traditions, energy healers referred to “earth energy” and “sky energy” (or “celestial energy”). They seemed to believe these energies outside the human body were connected with the chakras, the energy centers, within the human body. They also believed that all energy in the universe, both inside the body and outside the body, was connected. The Higher Chakras in the 12 Chakra System is basically a modern way of expressing essentially the same principle.

How Do Psychics Use the Divine Gateway Chakra?

The Divine Gateway Chakra Is Also the Gateway To Happiness

People who learn how to access their Divine Gateway Chakra are some of the happiest and fulfilled people you’ll ever meet. They have such an apparent inner peace about them that nothing seems to detract them from tranquility. They also tend to be very successful people in their careers, relationships, and other pursuits. They are thought to be “one with the Universe” and “one with the cosmos.” You gain an understanding and acceptance of her deepest truths of the Universe. They are humble yet accomplished and confident people who seem to have a positive and lasting effect on the lives of everyone they touch. This is another reason psychics are so drawn to the Divine Gateway Chakra. It helps them with their life’s mission.

If you’ve ever known anyone who seemed to suddenly and dramatically change, the explanation may be that they were able to activate more fully and access their Divine Gateway Chakra. We all know of a person like this. They start out angry, bitter, close-minded, and not very kind to their fellow humans. Then seemingly overnight, they seem to have an epiphany and they change their “wicked ways” and become a person admired by all. Some people who stingily wealthy before seeming to suddenly have the grandest time finding a good charitable purpose to give away their money.

If you’re lucky enough to have a conversation with such a transformed person, try to explore HOW they made this sudden transformation. Listen carefully to what they say and try to read between the lines. Try to feel what they say instead of simply listening to the words they use. Find out if they visited a psychic or another energy healer. You may find enhanced access to the Divine Gateway Chakra and the other Higher Chakras at the root of their seemingly miraculous transformation! Just by hearing their story, some of the higher energy they have obtained may be passed to you. Of course, you may also find the same transference of energy by interacting with volunteers are a soup kitchen.

When you learn how to access the Divine Gateway Chakra, it’s like being given entrance to a “secret club.” You’ll be able to communicate directly with Deities, Angels, Super Humans, and other Vibrating Energy Beings. There is really nothing more powerful in the material world than the knowledge and wisdom you can gain from such access. Some people describe this Higher Chakra as pure bliss.

it is said that through the Divine Gateway Chakra, you can explore other realms of the Universe. You can travel to other worlds with a strong connection to the entire cosmos to fuel your journey. Once you reach this level, there’s no going back either. Your mind and spirit will be exposed to things you can’t even begin to imagine now. It’s a completely revolutionary experience. Your entire mindset will change, and you’ll be a happier human being capable of extraordinary actions.