Venus Square Uranus: Out with the Old and In with the New!

Home » Blog » Astrology » Venus Square Uranus: Out with the Old and In with the New!

This article will look at one of these dynamics happening between two points this month, Venus in Aquarius squaring Uranus in Taurus. When two points “square off” with one another, they challenge and compete with each other.  The point of relating will challenge the point of revolution.

The Square, and Venus and Uranus

This month, when the faster moving Venus reaches 02 degrees 48 minutes (02d48m) of Aquarius, it will square Uranus at the same degree, but in Taurus, at 8:15 am EST on December 22nd.  The impact of this relationship begins to be felt up to 3 degrees before and 3 degrees after the exact aspect and is known as the orb of influence.  When the faster moving body approaches, the aspect is said to be approaching and is building energy.  Once the exact aspect has passed, the aspect is said to be separating and is losing energy.  The duration of this particular aspect will run from December 16th to December 27th. 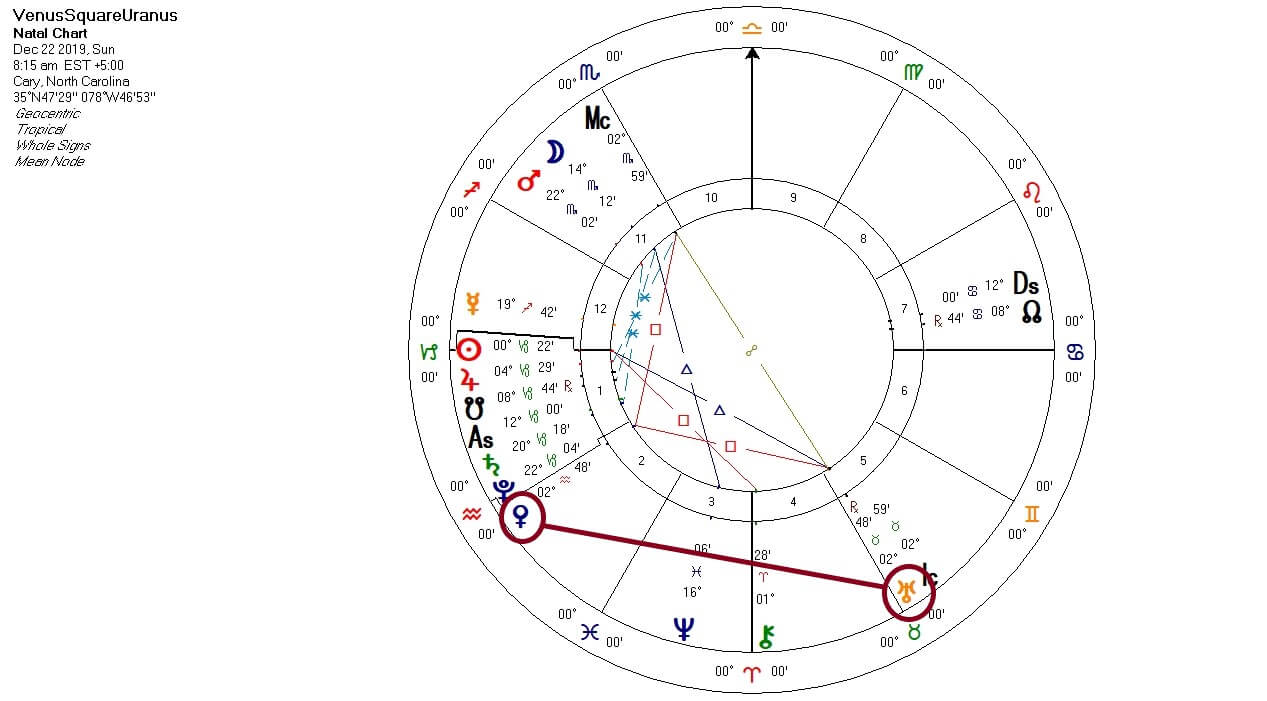 With Venus moving through Aquarius at this time, there is a focus on the ideals of relating and the revolutionizing of our connections.  This placement is the least personal placement for Venus since Aquarius is a sign known for its detachment

The keynote is, “attachments are idealistic and impersonal” and the symbol is, “a group of young people admire a statue of Aphrodite in a museum” (Astrology: The Divine Science, Moore and Douglas, 168). With Venus in Aquarius, it looks to Uranus for additional guidance.  Uranus is currently in Taurus, so Venus needs to act cautiously and conservatively.

The Sabian Symbol is 3 Aquarius, “a deserter from the navy”.  From the book, The Sabian Symbols, author Marc Edmund Jones says, “this is a symbol of human independence carried to a point of extreme rebellion against things as they are, here emphasized in a disregard of all consequences for the sake of an immediate liberation of the spirit”.

The keyword is DEFIANCE. Further, he says, “when positive, the degree is genuine psychological courage in a repudiation of all meaningless loyalties, and when negative, complete inability to follow the rules of any game” (273).

With Uranus moving through Taurus at this time, the entire planet is going to be dealing with some radical changes related to the earth (Taurus), and resources that impact daily life (Taurus rulership of the 2nd House of Resources and Security).  We can expect new innovations (Uranus) from its time in Aries, that make it into Taurus, to become part of “everyday life” (Taurus). And also, aspects of everyday life (Taurus) will go through some radical changes (Uranus).

The keynote is, “revolution breaks old traditions to begin new ones” and the symbol is, “a family arrives at the restaurant in a driverless car”. With Uranus in Taurus, it looks to Venus for additional guidance.  Venus is currently in Aquarius, so Uranus needs to rethink its relationships and how it gets pleasure from life.

Venus Squares Uranus: Out with the Old and In with the New!

The square aspect seeks to challenge energies to force growth; points “encounter each other” from disparate elements, in this case, air and earth.  During the period of this square, the point involving relating and the point of revolution will test each other. This square is likely to be quite challenging since both points are in fixed, stubborn signs.

Venus in Aquarius is concerned with the idealistic visions for relating to others.  Uranus in Taurus needs to embrace new actions that can become new traditions. The strain comes from a desire to keep old nostalgia for people, places, and possessions while realizing that it is time to have a ruthless yard sale and clear out space for entirely new people.

In other words, there is only room on the shelf for a picture of grandma (Taurus) or an Alexa voice system (Aquarius).  Perhaps the tension will be solved with a third object, mutually agreed upon, or by leaving the shelf empty, thus both parties are mutually dissatisfied.