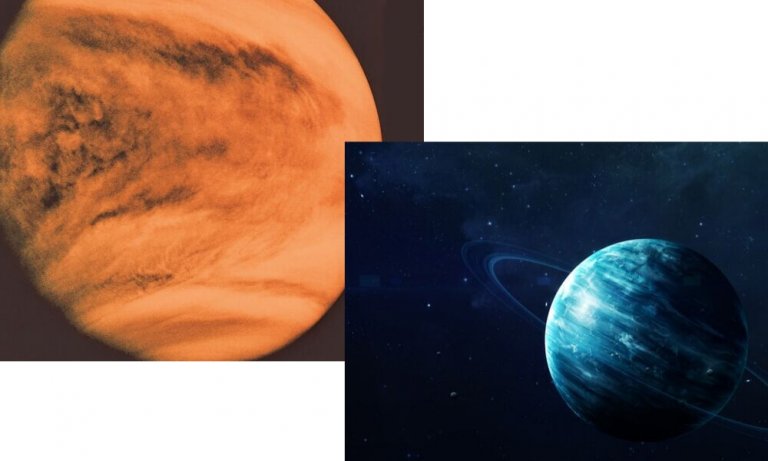 Throughout each month transiting points create dynamic relationships with your natal chart points.  Often times two transiting points will relate to one another in a way that affects us all, depending on the points involved.  This article will look at one of these dynamics happening between two points this month, Venus in Scorpio opposing Uranus in Taurus. When two points oppose one another, they seek balance.  The point of relating will seek balance with the point of revolution.

The Opposition, and Venus and Uranus

This month, when the faster moving Venus reaches 5 degrees 13 minutes (5d13m) of Scorpio, it will oppose Uranus at the same degree, but in Taurus, at 5:50 pm EST on October 12th.  The impact of this relationship begins to be felt up to 3 degrees before and 3 degrees after the exact aspect and is known as the orb of influence.  When the faster moving body approaches, the aspect is said to be approaching and is building energy.  Once the exact aspect has passed, the aspect is said to be separating and is losing energy.  The duration of this particular aspect will run from October 10th to October 15th. 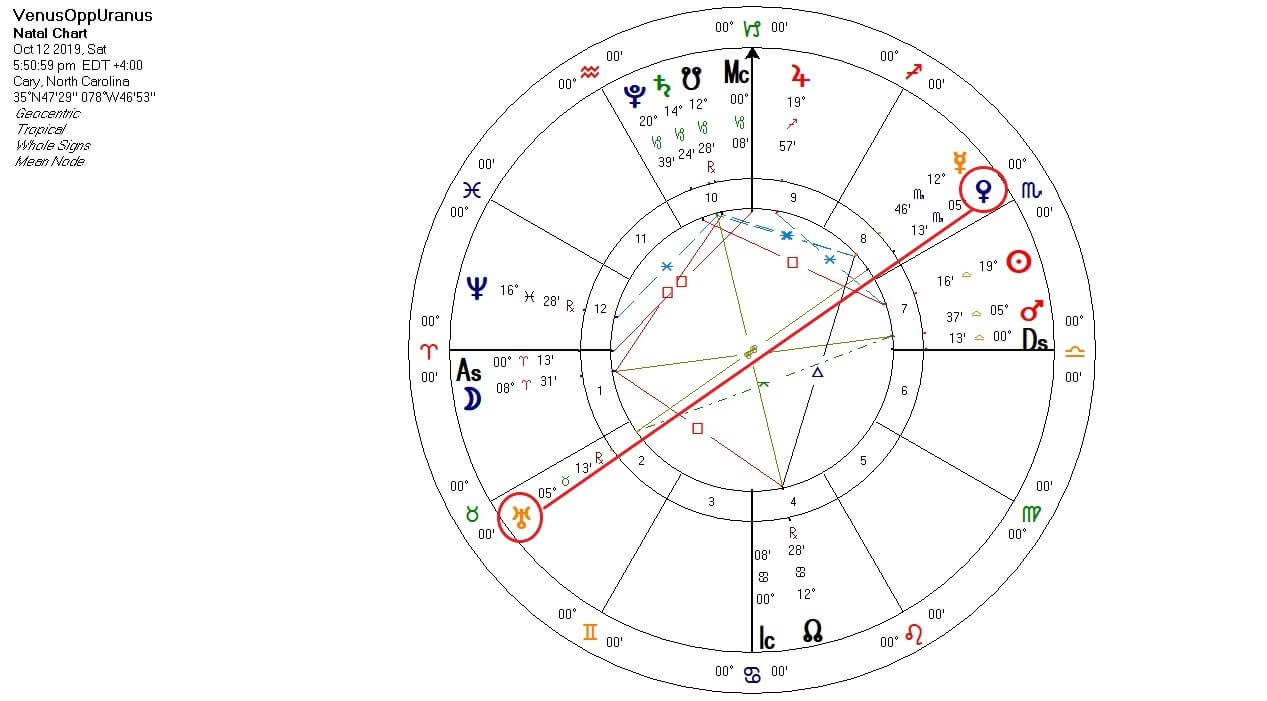 Venus, the Goddess of Love and Beauty, represents how we relate to others and want them to relate to us.  She rules our sense of beauty and what we enjoy for entertainment.  She has dual rulership of Taurus and Libra, and the 2nd and 7th House.  In Taurus, she rules over our body and our resources, what we need to feel physically connected and satisfied and what we need in terms of resources to feel safe.  In Libra, she rules the contracts we make with others to have binding and healthy relationships out in the world.

My Venus is in Aries in my 6th House of Service, so I prefer to relate to people independently, enjoy heroic stories for my entertainment, and be quite active with regard to my health.  Venus happens to be in Detriment in Aries, which is a martial sign, meaning she does not feel at all at home in this sign. She is like a diplomat in on an army base charged and ready for conflict.  The 6th House placement helps since this is the House of Service and a feminine house. So, more like a diplomat who comes into negotiating peace after the battle has been decided.

With Venus moving through Scorpio at this time, there is a focus on the hidden issues in my relationships and how they affect me at an identity level since Venus will be in my 1st House of Identity while in Scorpio.  Venus in Scorpio deals with the darker, more intense aspects of relating to others, like seduction, power issues, and transformation through emotional and sexual intensity.

The Sabian Symbol is 6 Scorpio, “a gold rush”.  From the book, The Sabian Symbols, author Marc Edmund Jones says, “this is a symbol of the exploitation of natural resources through personal initiative or intelligence, and of every individual’s essential independence of the commonplace limitations or superficial inadequacies of life”. He assigns the keyword as AMBITION. Further, he says, “when positive, the degree is instinctive self-dedication to the unseen potentials of everyday existence, and when negative, a lack of practical discrimination and an irresistible desire for easy money” (316).

Uranus represents revolution, breakthroughs, sudden changes in fortune, and emerging ideas.  Uranus rules technology and science and the benefits and problems they bring and solve for the 11th House of Community.  It is an air point that is generational, spending around 8 years in a sign. Currently, Uranus is moving through the sign of Taurus, which it entered this year in March.

My Uranus is in Virgo in my 11th House of Community, very close to, but not quite conjunct with my natal Pluto.  I am a part of the “fix it” generation.  Uranus would prefer to be in an air or fire sign, but of the earth signs, Virgo is probably the most accommodating since it is mutable (adaptable) and associated with problem-solving (i.e., invention, which Uranus certainly loves!).  It is also in the House of its rulership in my chart, so a positive placement for me.

With Uranus moving through Taurus at this time, the entire planet is going to be dealing with some radical changes related to the earth (Taurus), and resources that impact daily life (Taurus rulership of the 2nd House of Resources and Security).  We can expect new innovations (Uranus) from its time in Aries, that make it into Taurus, to become part of the “everyday life” (Taurus), and aspects of everyday life (Taurus) to get some radical changes (Uranus). For more about this placement of Uranus, check out astrobella’s article.

The Sabian Symbol for Uranus at the time of the opposition is 6 Taurus, “a bridge being built across a gorge”. Jones says, “this is a symbol of the conquest of natural difficulties by conscious means and of any individual’s essential independence of nature’s accidents or inconveniences”. The keyword is CHANNELSHIP.  Further, he says, “When positive, the degree is the directness and the practical instinct by which personality achieves the ultimate benefit of its powers, and when negative, a love of short cuts and every possible escape from the obligations of daily living” (184).

The opposition aspect seeks to balance energies that are in opposite signs; the points and signs involved need to harmonize to get the full value of the aspect.  During the period of this opposition, the point involving relating to others and our physical bodies and the point involving revolution and radical action must find a balance, creating collaborative energy between Scorpio transformation through intense power shifts and Taurus stability through long-held traditions.  This opposition will certainly be mixed since Uranus, as a change agent, will appreciate Scorpio while Venus, which rules Taurus, will feel strength connecting with that sign.

The very challenging nature of this aspect, with these points, will come from the fact that what has been cannot be going forward.  The best use of the Venus energy would be to be upfront about necessary changes, even hard ones, rather than secretive.  Uranus will have to resist blowing things up, which the placement in Taurus should help.  The radical rebalancing will not be about keeping things as they are or “going back to the way things were”, but rather answering the question of what the “new normal” will be.

The balance is achieved by accepting those truly new ways of acting, thinking, and relating will be required during this transit in order to deal with the situations you face in your life at this time.  If you attempt to resist change, these energies will not feel kind to you at all.  They do not encourage rapid shifts (Taurus and Scorpio are not rash signs), but Uranus and Scorpio, one the outer planet and the other a later sign of the Zodiac, do direct the energy of this opposition.

Getting to Know Chiron in Astrology

The Goose Totem in the Native American Zodiac