Ingress occurs when a point moves out of one sign and into another sign. This transition results in a change in tone and meaning for the point, which is an energy shift designed to promote and continue growing on a regular and ongoing basis.  Each point moves at a different speed, so the ingress for Mercury, which is faster than Mars, happens more frequently (mostly every 3 to 4 weeks) while the ingress for Pluto happens much more slowly (after a decade has passed).

This article will look at the ingress of Venus as it leaves Libra and enters Scorpio.  The change in tone involves leaving the cardinal air sign to enter the fixed water sign of the Zodiac.  Energetically, it will be like leaving the chapel to enter a brothel.

On October 8th Venus will leave Libra and enter Scorpio at 1:05 pm eastern standard time.  In Libra the “tone” was tied to how we relate, negotiate, reason, and judge.  Venus, an air/earth sign (Libra and Taurus rulership), was in its rulership in Libra.  In Scorpio, the tone is darker and more secretive, and it will be in Scorpio until November 1st. 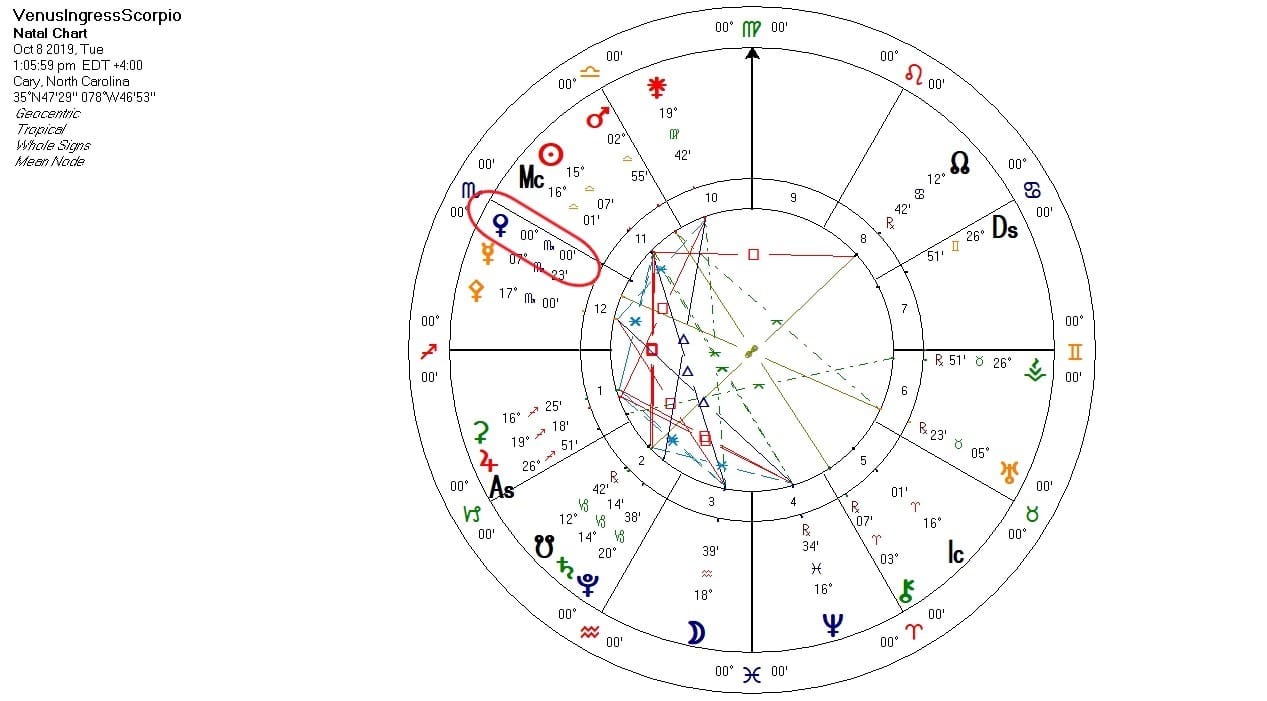 In Scorpio, Venus, an earth and air point (ruling both Taurus and Libra) finds itself in the sexual energy and intense death/rebirth energy of Scorpio.  Perhaps the best examples of Venus in Scorpio are the femme fatale or the adventurer rogue.  The relating energy taps into primal sexuality and the seductive shadows of bedrooms filled with candlelight and musk. Venus in Scorpio wants to explore the nature and results of seduction and relating in secret to find buried truths.

As Venus moves through Scorpio, our choices in a relationship will tend to want to look down the dark path, open the locked room, lift up the rock to see what is underneath, and plunge to the depths of our desires.  Simply put, we will all be feeling energy hitting our sacral chakra and we might be surprised by what turns us on during this transit and how often and much we are turned on!

The ingress moment of entry in a Whole Sign astrology chart is always the 1st Sabian Symbol of the sign. In this case, our point of relating will enter Scorpio 1, which is “a sight-seeing bus”.  In the Sabian Symbols book, by Mark Edmund Jones, he writes, “This is the symbol of the individual spirit in its catholicity (inclusiveness) and of the naivete and indomitability of its interest in life as a whole.  The keyword is FRIENDLINESS.”

“When positive, the degree is a basic impersonality which capitalizes on the opportunity of the moment and helps reorder the situation whenever there is difficulty or dissatisfaction, and when negative, a genius for avoiding any and every actual expenditure of self” (181). This energy is stirring up temptation.  So, be aware that if a temptation presents itself, there is a good chance you will feel a strong urge to act on it, and there could be some very intense consequences for doing so.

Based on the date, time, and location of my birth, my chart wheel begins with Scorpio and ends with Libra.  The wheel is made up of 12 segments (pie pieces) called Houses.  Scorpio rules my 1st House of Identity and Libra rules my 12th House of Spirituality.  On October 8th transiting Venus will enter my 1st House of Identity, so I can expect the time between October 8th and November 1st to be a period of intense relationship interactions.

Additionally, I have four points in Scorpio and one of them, Ceres, is directly on the cusp at 0 degrees and 50 minutes, which means I will likely be able to really feel the shift of Venus into Scorpio on that very day.  Ceres rules nourishment, the harvest we need to bring in to feel like we have enough for our needs and hopefully some excess for our enjoyment. The “deep truth” of my Ceres is that my identity is intimately tied to how I find nourishment, and a significant part of that nourishment comes through the intensity of my relationships.

When points move through our houses, they bring their unique energy to bear on that area of our lives, both as an emphasis in our own inner development and with external triggers.  This particular transit of Venus will be highly personal for me.  For you, it might be doing its work in the area of your career (10th House), or family (4th House), or community (11th House).  Wherever it is entering that sign in your chart, you can expect some intense relationship transformation (Scorpio) to take place.

In their book Astrology, the Divine Science, Marcia Moore and Mark Douglas give Venus in Scorpio the following keynote: “passionate feelings seek indirect modes of expression” and the symbol is: “a femme fatale works as an undercover agent” (135). During this time everyone will be feeling quite a bit more passionate about their relationships and more deeply frustrated if their relationships lack the passion they want or need.

Expect yourself to be more willing to follow your loins than your logic.  Oddly, this can be the time in which hidden things become known, but also a time when people make an intense effort to hide things they wish no one would know, for fear of the consequences.  Deep secrets can come out during this transit and new deep secrets can be created.  Be careful with your feelings and the feelings of others; deep still waters hide all kinds of treasures and monsters.

Mars Ingress in October 2019 – Justice with a Sword

Which Wild Animal Are You According to Your Zodiac Sign?