The Decans of Pisces 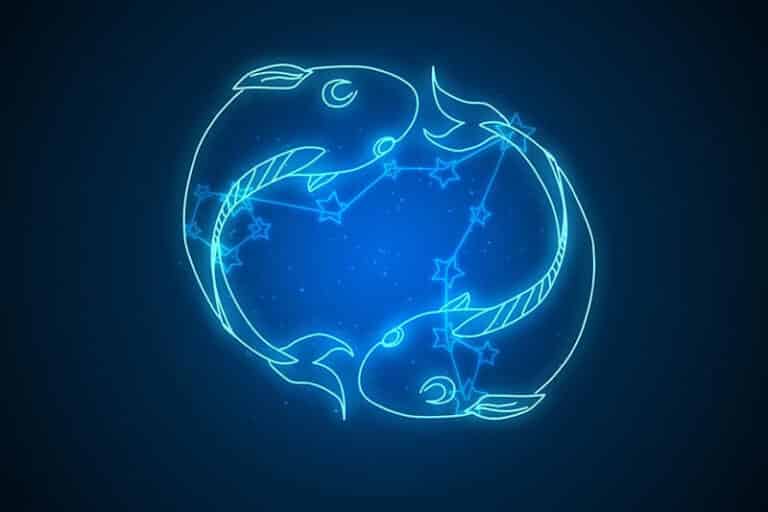 This year we entered the zodiac sign of Pisces the Fishes on the 19th of February 2022.

‘Pisces’ is from the Latin for fish, and the zodiac sign is named after one of the largest constellations in the zodiac. The two fish are said to represent Venus and Cupid in Greco-Roman mythology after they turned themselves into two fish to escape a terrible monster called Typhon.

Pisces symbolizes the concept of The Flood. This time of year marked the rainy season in Mesopotamia -where western astrology originated.

This is also the time of the winter melt when mountain streams swell the rivers and flood the valleys below, and it is the time of year when we see the first spawning of freshwater fish.

Pisces, named for the Latin plural of fish is the 14th largest constellation overall covering a large V-shaped region of the northern hemisphere. While it is large, its stars are faint and not easy to see with the naked eye.

Pisces is seen as two fish swimming at right angles to each other, one to the north and one to the west, attached to one another by a cord of stars, just as life and death, and winter and spring are conjoined and cannot be separated. They are usually depicted as freshwater carp.

Pisces is the twelfth and final sign of the zodiac year and rules the twelfth house in a personal horoscope, representing hopes, dreams, and fears- what lies beneath. It stands for the mystery of the unknowable.

Pisces is the constellation associated with Neptune in Modern astrology, but this planet was not discovered until 1846, and Jupiter is the original ruler of Pisces in traditional (Hellenistic) astrology.

Astrologers vary in respect of which of these they will use.

The zodiac signs paint a portrait of a person born at a particular time of year, in a particular season. A baby born in summer arrives into a different physical environment from a winter baby; with differences in temperature, hours of daylight, maternal diet during pregnancy, and so on, with potentially different effects on the baby’s physical makeup and constitution.

The court card of Pisces is the charismatic Knight of Cups, signifying an offer, an invitation, a proposal, a welcome message, a bringer of good news, an admirer, lover, chivalry, a Sir Galahad, good health, a healing cup, a loving cup, a celebration, a birth.

Pisces is a mutable sign, marking the end of a season. The other mutable signs are Gemini and Sagittarius. Pisces marks the end of winter leading up to the spring/vernal equinox. Of all the zodiac signs, the mutable signs are traditionally considered the most flexible and adaptable, the ones most at ease with endings and transitions and change.

Pisces is not only the last sign of winter as we are moving into spring; it is the last sign of the whole zodiac year, the culmination of all the signs that came before it. Pisces rules the feet and symbolically Pisces has one foot- in the death of the old year, and one foot in the new life of springtime.

Pisces is famous for its emotional depths and visionary capabilities; sensitive, intuitive, psychic, artistically, and intellectually gifted, but it is also competent and more than capable of outright practical, scientific or technical brilliance.

But of course, there is no such thing in reality as THE Pisces personality. You are a unique individual. Your zodiac sign (sun sign) is a major keynote, but it is nothing like the full picture in real life – or in astrology.  There are many other factors in play, your rising sign, your Moon sign; the planets in your houses, your decan, and the degree of the actual day you were born.

If you don’t feel like a ‘typical’ Pisces, there are all these other natal horoscope factors to take into account, but it could also be that you’re a second or third decan Pisces, rather than a ‘most typical’ first decan Pisces.

What are the Decans?

The decans (or decanates) are a way of marking time, breaking down each of the zodiac months into three shorter blocks of roughly ten days each.

The Zodiac is a belt of sky we see from earth, tracking the path of the sun across the sky over the course of the year. We call this pathway of the sun ‘the ecliptic,’ The Greeks named the signs of the zodiac after twelve of the constellations appearing on, or crossing this zodiac belt beginning with Aries, then Taurus, Gemini Cancer, Leo, Virgo, Libra, Scorpio, Sagittarius, Capricorn, Aquarius, and lastly, Pisces.

Each of these zodiac signs represents a 30-degree section of the zodiac belt. Each sign is then further sub-divided into three blocks of ten degrees, each about ten days in length. This gives us the ‘decans,’ also called decanates, from the Latin meaning ‘ten.’

The decans are known as the ‘thirty-six faces of astrology,’ adding extra depth and nuance to the story of your zodiac sign, distinguishing between someone born at the start of their zodiac month from someone who is born during the middle or at the end of the zodiac month.

The first decan of any sign is considered the most typical. Pisces makes for depth, versatility, and adaptability while Neptune presents a soft or gentle manner or appearance. This Pisces is very rarely aggressive or confrontational, but not for lack of courage.  There is a sense of a push and pull going on here. Jupiter means they think big and step forward. Neptune means they do a lot of swimming around in circles or hiding in the weeds. Neptune, the planet of illusion, is their sub-ruler, which emphasizes creativity and imagination. This Pisces native connects with other people on an unconscious level, almost hearing what they are thinking. Maybe they haven’t noticed this about themselves yet, or take telepathy for granted, but watch out for the signs.

This Pisces has a tendency to go on long and winding detours whatever their destination. While quiet, this Pisces has deep passions and their love life can be tempestuous. Their ideal partner is lively and communicative with a can-do approach.

They often look younger than their age, but they do need to be especially beware of unhealthy habits in order to protect their health and their mood; the chest, lungs, and feet in particular while Pisces is extra-sensitive (vulnerable to) the effects of overindulgence of alcohol or mind-altering drugs.

A desire to do good for mankind is characteristic of this kindly first decan Pisces.

The sub-influences for this decan are Cancer, ruled by The Moon. Cancer is the natural ruler of the fourth house of home, family, and security. These Pisces subjects typically stay very close to birth family members. Pisces may struggle to loosen break parental ties and become independent but must do so if they want to progress and develop and become the adult in the room, provide for and parent their own children, building their own family unit.

These are the most elusive most watery of the fishes. Now you see them, now you don’t.  Their zone of the sky from March 1 –10 houses the stars of the water of Aquarius, Eridanus the river, and the west fish of Pisces.

These Pisceans are masters of disguise and can blend into any environment effortlessly. Pisces decan 2 absorbs. It is sensitive and psychic, but for the same reason, these people need to choose their company wisely and with care and form healthy habits early in life. These subjects are supremely susceptible to the influence of others in their environment, and this can work positively or negatively.

Energetic Mars and Scorpio – natural ruler of the eighth house of desire, willpower, drive, and determination – brings to this Pisces extra charisma, and the drive and determination to push forward where Pisces otherwise can tend to hold back, lacking that forcefulness. This Pisces has the artistic creativity of Pisces/Neptune but has that extra sticking power to turn dreams into realities.

Pluto brings depth and Mars brings speed and energy of the attack. This Pisces needs to stay busy and needs plenty of energy outlets.

Pisces marks the completion of the zodiac wheel and this final decan marks, the point at which we move into Aries, and a whole new circle starts over again. Aries too is also ruled by energetic Mars.

These Pisces natives, just like the other decans, are enormously receptive to their environment, but they tend to stay more aloof and watchful and are less likely to blend in or fall under the influence of what is going on around them. They are highly observant, natural detectives, well suited to the police or other kinds of investigative work

Pisces-Scorpio is an excellent listener, tuning in to the wants and needs of others, listening between the lines to what is not being said.

The Cusps of Pisces

Aquarius-Pisces: This is a Pisces native with Aquarius tendencies; a person of high principles, often rather quiet, refined, and with strong likes and dislikes. This Pisces is likely to travel a fair bit and has the executive ability and can make money, but can become bored quite easily and needs to be extra careful not to get trapped, becoming committed too soon in a relationship that really doesn’t suit them

Born on the Pisces-Aries cusp, this native is especially instinctive and brave. This mix of energy combines physical and moral courage with compassion for others which can make this Pisces individual a successful leader. This person is loyal to friends and colleagues, and they are also generous, and eager to see others do well.

For Pisces, we have drawn the Sun card. Health and happiness, a new day dawns, think big, think bold, but allow plenty of time for simple relaxation. It looks as though Jupiter is bringing Pisces a boost of extra luck this year. 2022 is auspicious for new beginnings, projects, and partnerships, but know when to lie low, and take care not to overdo things, burning a candle at both ends.