This article will look at one of these dynamics happening between two points this month, Sun in Capricorn trines Uranus in Taurus. When two points trine with one another, they support one another.  The point of life’s core energy will give support to and get support from the point of revolution and wisdom.

The Trine, and Sun and Uranus

This month, when the faster moving Sun reaches 02 degrees 46 minutes (02d46m) of Capricorn, it will trine with Uranus at the same degree, but in Taurus, at 4:30 pm EST on December 24th.  The impact of this relationship begins to be felt up to 3 degrees before and 3 degrees after the exact aspect and is known as the orb of influence.  When the faster moving body approaches, the aspect is said to be approaching and is building energy.  Once the exact aspect has passed, the aspect is said to be separating and is losing energy.  The duration of this particular aspect will run from December 21st to December 27th. 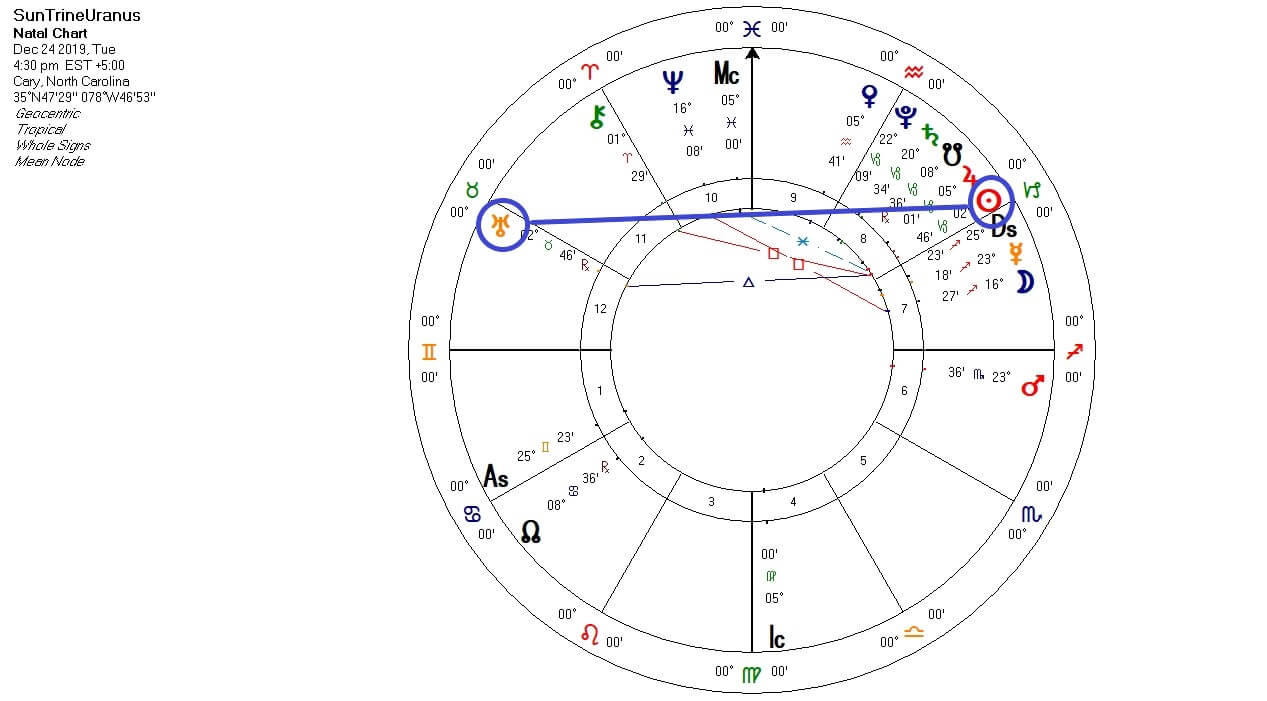 The Sun represents our life path, the energy of our identity, and the drive to survive and thrive.  The Sun rules Leo and the 5th House of Creativity.  The 5th House oversees love affairs, creative action, leadership, children, and play.  Which sign and house the Sun occupies in your chart indicates the way you need and want to follow your life path and where you want to focus on the core of your energy.

With the Sun moving through Capricorn at this time, the keynote is, “the power of individuality manifests through organizational ability” and the symbol is, “a mountain climber plants a flag upon a rocky summit” (Astrology: The Divine Science, Moore, and Douglas, 153). Saturn is the ruler of Capricorn and it is currently in Capricorn, so the Sun’s energy will be concerned with outcomes and results.

The Sabian Symbol is 3 Capricorn, “the human soul receptive to growth and understanding”.  From the book, The Sabian Symbols, author Marc Edmund Jones says, “this is a symbol of mankind’s fundamentally naïve capacity for experience, and of every individual’s equally fundamental dependence on the understanding and support of fellow participants in each moment of self-discovery”.

He assigns the keyword as AVIDITY [extreme eagerness]. Further, he says, “when positive, the degree is a gift for entering the kaleidoscopic patterns of personal relationship with an unbounded enthusiasm, and when negative, simple shiftlessness or abandon” (243).

With Uranus moving through Taurus at this time, the entire planet is going to be dealing with some radical changes related to the earth (Taurus), and resources that impact daily life (Taurus rulership of the 2nd House of Resources and Security).  We can expect new innovations (Uranus) from its time in Aries, that make it into Taurus, to become part of “everyday life” (Taurus). And also, aspects of everyday life (Taurus) will go through some radical changes (Uranus).

The keynote is, “revolution breaks old traditions to begin new ones” and the symbol is, “a family arrives at the restaurant in a driverless car”. With Uranus in Taurus, it looks to Venus for additional guidance.  Venus is currently in Capricorn, so Uranus needs to form relationships with disciplined partners and stable circumstances.

The trine aspect creates a powerful flow between two points. If a sextile aspect, also a flowing aspect, is a straw’s diameter, then a trine is the glass or cup diameter the straw would be sitting in to extract the liquid.  The Sun and Uranus trine in earth signs represents a powerful opportunity at breakthroughs that can affect everyday life in truly positive ways.

This energy would be akin to the positive intention and real results of putting a man on the moon or connecting continents with trans-Atlantic cable, or any seemingly impossible or fantastic task that changes the understanding and action in the world on a fundamental level.  The Sun gives life, to ideas and action, and Uranus shakes the foundations.  Together there is a chance for tremendous positive change.

The Sun is the core energy of life and Uranus is revolutionary.  The Sun in Capricorn wants to make a living from achievement and success to build status in the world.  For Uranus in Taurus, there needs to be a revolution in the foundations of society and our day-to-day lives.  When the two combine through a trine aspect, change is easier to obtain and more rapid to complete.

In your personal life, this can be six days you can use to plan the next year, five years, or ten years.  The energy of productivity will be especially high so you should act to make some fundament change in your environment (Taurus) that will help you towards your goals (Capricorn), perhaps by converting a room in your home into a new workspace or by getting new tools or a new computer to help you with a work or serious hobby goal.