Before the discovery of Uranus, astrology practice worked with the 7 visible astronomical bodies that could be seen with the naked eye, starting with the Sun and ending with Saturn.  Often referred to as classical or Hellenistic astrology, this 7-point system was the astrology practice for several millennia.

Tropical Western Astrology is based on the seasons and not the constellations, so the 12 signs of the Zodiac change between the 19th and 22nd of each month and stay consistent with each month.  Someone born in April, on the 9th, will be an Aries.  In Sidereal Eastern (Vedic) astrology, that same person would have Pisces as his or her Sun sign because that system is based on the constellations and they have shifted signs over time in relation to the seasons.

Since sky watchers could only identify the points they could see with their naked eye, they were only able to name the Sun, the Moon, Mercury, Venus, Mars, Jupiter, and Saturn.  With 12 signs and 12 divisions of the wheel (called houses) and only 7 points, all the points except the Sun and Moon did “double duty” in two signs and two houses.

Below is a chart layout showing the pattern of rulership for each point and house.  You will see the Sun and Moon as singular rulers, Leo and Cancer respectively.  Then you will notice a pattern starting with Mercury on either side next to the Sun and the Moon, then Venus, then Mars, then Jupiter, and finally Saturn side-by-side and opposite the Sun and Moon. 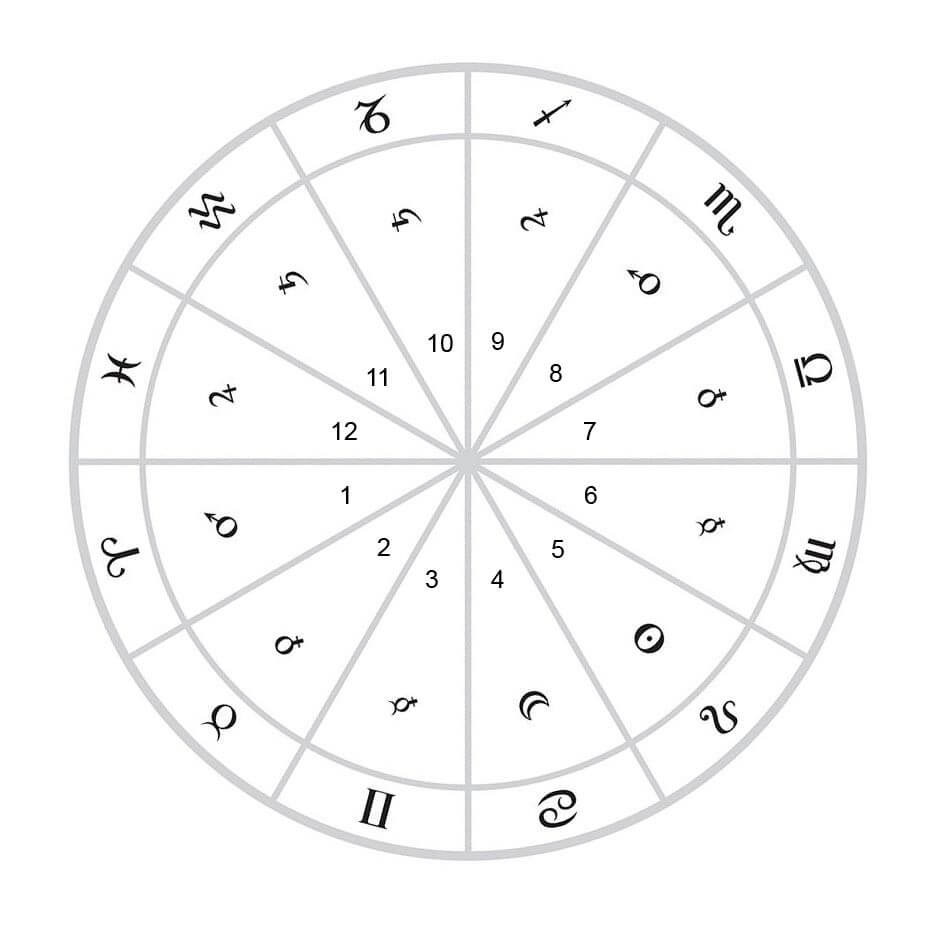 After the discovery of Uranus, Neptune, Pluto, and Chiron, these points displaced the dual rulership of Saturn, Jupiter, Mars, and Mercury, respectively.  Chiron is just now, as in 2019, beginning to make an inroad into the 6th House, leaving Venus as the only point still having dual rulership (of Taurus/2nd House and Libra/7th House).

The discovery of the asteroid belt and many of its significant points are also starting to be used more and more by professional astrologers, including but not limited to: Juno, Pallas Athena, Ceres, Vesta, Zeus, Hygeia, and Eris. Astrology charts, like human civilization and individual personalities, are becoming far more complex, which has led the field of study somewhat far away from the original 7 that are still the foundation of the chart.

Without a doubt, Brennan and George’s books on Hellenistic Astrology are comprehensive and fascinating.  Some of the key features they explain can actually help you enter into a study of astrology in a simpler and most logical way (not surprisingly there are a few inconsistencies among the ancient texts and astrologers that are not and will not be resolved).  But, in the end, if you explore Hellenistic Astrology, here are some of the basics.

Currently, there are over 10 House systems to choose from and the most common is Placidus.  But classical astrologers used the Whole Sign system.  With Placidus, and many of the others, houses can be greater or less than 30 degrees and they can start at various degrees of a sign and even engulf a sign entirely (know as interception).  With the Whole Sign system, all the houses start with 0 degrees of a sign.

The Ascendant and Descendant are always in the 1st and 7th Houses, respectively, but they become points within the house rather than the edge (or cusp) of the 1st and 7th House.  Something very interesting happens to the Medium Coeli (Midheaven) and Imum Coeli, the highest and lowest point of the Sun on a given day.  They can reside in the 9th/5th, 10th/4th, or 11th/3rd Houses rather than being fixed as the cusp of the 10th and 4th.

Mercury can be either a day or night point based on its position in relation to the Sun.  If Mercury crossed or would cross the horizon before the Sun, it is recognized as the Morning Star Mercury and is Diurnal.  If it follows the Sun on the day of birth, then it is the Evening Star Mercury and Nocturnal. So, the benefit would apply to Mercury if the chart is Diurnal and Mercury is the Morning Star and vice versa if the chart is Nocturnal and Mercury is the Evening Star.

Another important and basic concept is “planetary joy”.  Day planets (Jupiter and Saturn) “rejoice’ when they are in the same hemisphere as the Sun (regardless of whether the Sun is above or below the horizon) and the night plants (Venus and Mars) “rejoice” when they are in the hemisphere opposite the Sun.  Planets can also experience “joy” or “unhappiness” in certain signs and based on the gender of the point and the gender of the sign.

Putting It All Together

Hellenistic astrology is much more fated and “fatalistic” than our more modern and “psychological” astrology that places tremendous emphasis on free will.  Most charts run through the Hellenistic paradigm will be “nothing special”, just a mix of some joy and some sadness which individuals will have to find a way to endure.  Even so, the model is incredibly useful, efficient, and logical.

Having your chart cast and read through the lens of Hellenistic Astrology can prove quite enlightening and somewhat easier to interpret once you know and follow the rules.  It is not a perfectly closed and unambiguous approach, but it is not as open to variable interpretations as modern processes.  For beginners, this can certainly be a good starting point; and for professionals, it is a necessary foundation.