This article will look at one of these dynamics happening between two points this month, Mercury in Sagittarius squaring Neptune in Pisces. When two points “square off” with one another, they challenge and compete with each other.  The point of communication will challenge the point of mystery and surrender.

The Square, and Mercury and Neptune

This month, when the faster moving Mercury reaches 16 degrees 04 minutes (16d04m) of Sagittarius, it will square Neptune at the same degree, but in Pisces, at 11:13 pm EST on December 19th.  The impact of this relationship begins to be felt up to 3 degrees before and 3 degrees after the exact aspect and is known as the orb of influence.  When the faster moving body approaches, the aspect is said to be approaching and is building energy.  Once the exact aspect has passed, the aspect is said to be separating and is losing energy.  The duration of this particular aspect will run from December 15th to December 22nd. 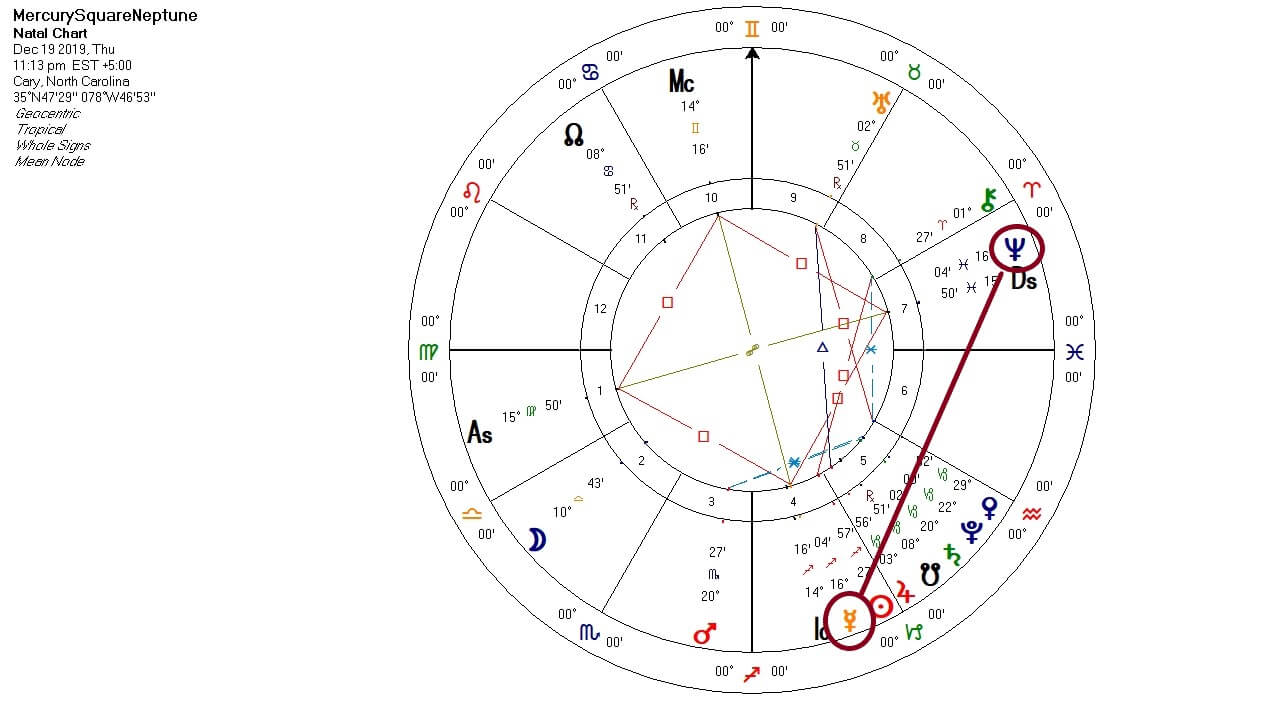 With Mercury moving through Sagittarius at this time, there is a focus on communicating the beliefs, values, and scholarly knowledge to as many people as possible.  Sagittarius rules higher education, religious institutions, and worldly knowledge.

The keynote is, “the mind ranges over a variety of abstract concepts” and the symbol is, “a scholar compiles logical proofs of the existence of God” (Astrology: The Divine Science, Moore and Douglas, 145).

The Sabian Symbol is 17 Sagittarius, “an Easter sunrise service”.  From the book, The Sabian Symbols, author Marc Edmund Jones says, “this is a symbol of man’s achievement on the level of spiritual or eternal fellowship with others, here emphasized objectively by the enduring values he is able to dramatize for himself in everyday religious terms”.

The keyword is REBIRTH. Further, he says, “when positive, the degree is an unusual realization of immortal resources and an ability to employ them wisely, and when negative, overconcern with superficial form and ceremony” (227).

With Neptune moving through Pisces at this time, the entire planet is getting spiritually awakened.  Neptune’s influence is never direct, never even easy to assess.  A simple joke describes the essence of Neptune: two young fish are swimming along, and an older fish approaches them and says, as he swims by, “hey boys, how’s the water?”  The young fish respond, “fine” and keep swimming.  Not long after, one of the young fish says to the other, “what’s water?”

With Neptune moving through Pisces at this time, the keynote is, “the power of spirit moves through all individuals” and the symbol is, “a beggar and a wealthy person share food and philosophy on a park bench”.

The Sabian Symbol is 17 Pisces, “an Easter promenade”. Jones says, “this is a symbol of that constant expansion of self and experience which characterizes reality on its conscious levels, emphasized here on the side of humanity’s utterly individualistic self-expression”.

The keyword is CELEBRATION. Further, he says, “when positive, the degree is tireless self-refinement in an effective inspiration of others, and when negative, a craving for attention” (317).

The square aspect seeks to challenge energies to force growth; points “encounter each other” from disparate elements, in this case, fire and water.  During the period of this square, the point involving communication and the point involving mystery and surrender will test each other. This square is likely to be somewhat “elusive” since both points are in mutable, adaptable signs.

Mercury in Sagittarius is concerned with the essential beliefs and philosophies we use in our daily lives to guide us morally in our interactions with the wider world.  Neptune in Pisces is spiritual vision, dream guidance, illusion, and disillusion. The strain comes from how our philosophies and beliefs struggle to accept hypocrisy and chaos, which can actually lead to profound insight and understanding, or doubt and disbelief.

Sagittarius likes to study, experience, and master any subject or skill that interests it, so with Mercury moving through this sign you will think your thoughts strongly enough that you expect everyone else should think the way you do and you will be happy to argue with them about your position and their position, if they differ.  Unfortunately, some of the most fundamental beliefs you hold will NOT remain standing against the waves of Neptune’s ocean.

Doubt and disbelief serve functions in our thinking and values to see how what we think and believe stands up under pressure in an ever-changing world.  Neptune reminds us that we cannot see answers all the time, so we make leaps of faith, sometimes small ones and sometimes rather large ones.  When Neptune exerts itself, as it has been doing at a very intense level while moving through the sign it rules, we are thrown into confusion.

Mercury in Sagittarius likes to be sure, to the point of being authoritarian.  So, the natural conflict comes when placed in a situation where you do not know or cannot know but want or expect to be able to give a definitive answer, which reminds me of a scene from the movie Groundhog Day.  The main character gets trapped in a time loop in a small town he desperately wants to leave.

Before the time loop goes into effect the innkeeper asks him if he will be checking out and he replies that there is a 100% chance he will be leaving.  After the first loop he says, 80% and it quickly goes down from there.  This square would be the energy of the first loop when the mystery presents itself, but he doubts it and feels like he can rely on his previous and secure knowledge about the way time works.

Eventually, he has to accept that the mystery of Neptune (the time loop) is greater than his sure knowledge (Mercury in Sagittarius) of time until he adjusts to the new reality of the loop, which he has to work through in order to eventually break free and get back into his more familiar pattern with time.

The Astrological Associations with the Swords Suit of the Minor Arcana