Mercury Retrograde in Scorpio – Deeper into the Dark Woods 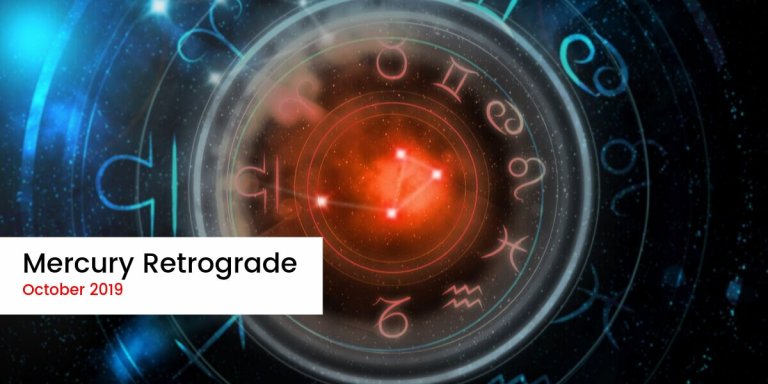 Retrograde motion is an interesting phenomenon in astrology practice. The term describes an optical effect that occurs when one body is moving faster than another body, they are traveling in the same direction, and the view from the faster body passing the slower body makes it appears as if the other body is “moving backward.”

Since astrologers view the solar system from an Earth-centric position (your birthplace/date/time on Earth), from time-to-time, all the bodies except the Sun, which is the actual center of the solar system and the Moon, which revolves around the Earth (and not the Sun), will have periods where they “appear” to move backward in the sky.  This periodic “change in perspective” means something interesting and useful in astrological practice.  This article will look at the third and final Mercury retrograde of this year.

The most famous retrograde is Mercury Retrograde.  Mercury takes 88 days to go around the Sun and approximately a year to go completely through the Zodiac.  So, roughly once a year Mercury will return to the same degree and sign as your birth, known as a Mercury Return.  To give you a sense of scale, Saturn returns to its degree and sign between 28 and 29 years of your life and again at 56 to 58.

In most calendar years Mercury will retrograde three times for three weeks each time (so in 2019, from 3/5 to 3/28, 7/7 to 8/2, and 10/31 to 11/20).  This year, the last retrograde will occur in such a way that Mercury ends up staying in the sign it entered the entire period of direct and retrograde motion.

More commonly Mercury will retrograde back from one sign into the previous sign so that the total time it spends in a sign when retrograde happens is around 4 weeks.  When Mercury goes retrograde on 10/31/2019 it will be at 27 degrees and 38 minutes of Scorpio.  For this reason, Mercury will be in Scorpio from October 9th until December 9th, a full 8 weeks!! 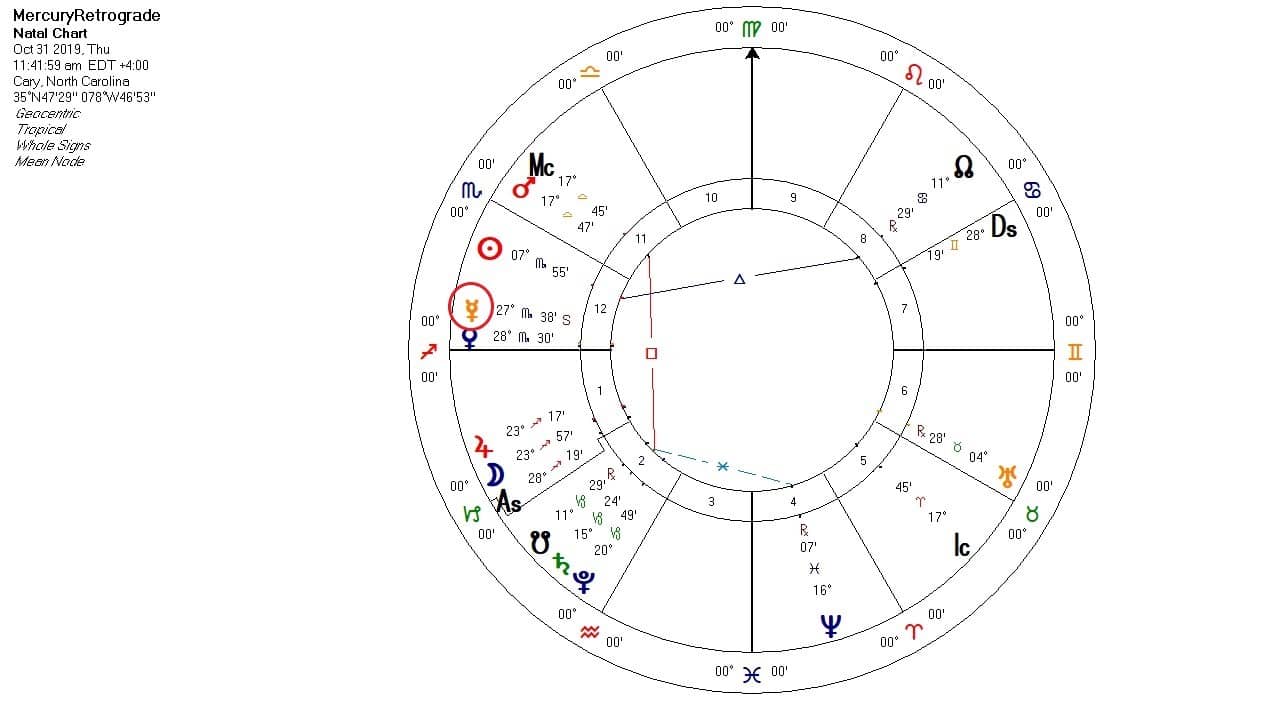 Out of 52 weeks in the calendar year, 9 of them will see Mercury Retrograde.  Only 3 or 4 days out of the year account for the stationary period when Mercury is moving from direct to retrograde.  Consider that humans tend to love rare commodities or experiences, so people born during a Mercury Stationary period will be the rarest of charts.  Mercury Retrograde people will be far more common than Stationary Mercury people, but not nearly as common as Direct Mercury people (D=82%, R=17%, S=1%).

Mind the Speed Limit, Especially When Mercury is Involved!

So, what does retrograde motion mean in terms of astrological interpretation?  It means a lot of “re’s”:  relax, reflect, re-evaluate, restore, rest, recuperate, review, re-establish, retract, and so on.  In other words, slow down!!

Think of Mercury direct energy like a highway speed; in the US the top speed limit is 85 mph in Texas, and in most countries, the top speed is 140 kph (excepting famously, the autobahn, in Germany, which boasts no speed limit).  Now imagine that the highway is coming to a section where it will run through or around a major city, requiring drivers to slow down.  They need to slow their speed because of a change in the density of traffic and housing/businesses in and around the city limits, making this an apt metaphor for retrograde meaning.

How much you need to slow down will depend on the specifics of the retrograde by point and sign.  Now here’s the crucial point (emphasis mine): retrograde motion is normal; it is part of the normal cycle of planetary observation. You can do anything during a retrograde period you can do during a direct period IF YOU MIND THE SPEED LIMIT!

The reason problems arise for individuals, a company, or a country during a retrograde phase is because they do not adjust to the change in the energy and thus DO NOT ADJUST TO THE NEW SPEED LIMIT! Imagine the kind of trouble you would get into if you are driving at autobahn speeds through the part of a city or town where a school is situated, and at a time when the school is taking in or letting out students!

Mercury Retrograde in Scorpio – Deep, Deep into the Dark Woods!

Mercury will be in Scorpio when it goes retrograde this month and will work its way back into Scorpio without leaving the sign.  For a more detailed explanation of Mercury in Scorpio, visit [my previous article on Mercury’s ingress into Scorpio this month].

Scorpio deals with things hidden, things that need to be eliminated (from the body, mind, and spirit), and things that need to transform. It is like going into a dark forest during the day and the retrograde phase is like having to work your way through it at night!

The Sabian Symbol is 28 Scorpio, “the king of the fairies approaching his domain”.  From the book, The Sabian Symbols, author Marc Edmund Jones says, “this is a symbol of the eternal promise underlying all inner self-realization since any actual fullness of life is altogether independent of the passing state of affairs in a world of time and space”.

He assigns the keyword as ALLEGIANCE. Further, he says, “when positive, the degree is a special competence of inward vision and a consequent outward perspective of high effectiveness, and when negative, capricious self-indulgence” (207).

This will likely be a period of intense evaluation of our relationships, as well as intense thoughts and conversations with people in our lives. Long-buried issues may or may not come to the light, but we will most likely find ourselves facing them, whether they are our issues or the issues of someone close to us. It can also be a time of creating secrets, choosing very selfish experiences in order to spark needed or much sought after transformation.

The full cycle of this Mercury retrograde does not finish until Mercury gets back to 27 degrees and 38 minutes of Scorpio, where it started its retrograde journey, which will be on December 7th.  The time between October 31st and December 7th is known as the “shadow period”, and until a point is “out of the shadow” it will still feel the residual energy of the retrograde effect.

10 Tips if You Love a Scorpio