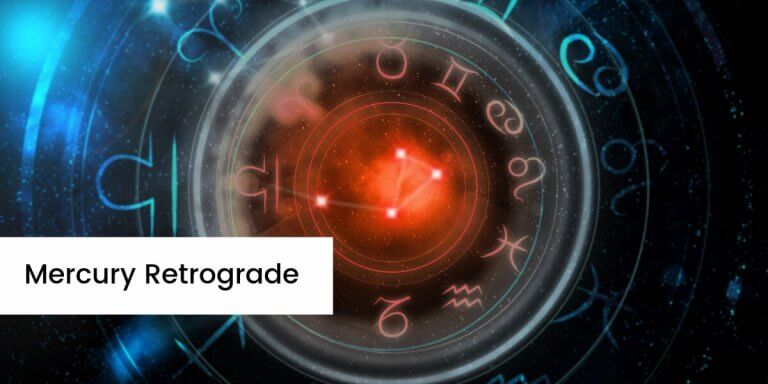 Retrograde motion is an interesting phenomenon in astrology practice.  The term describes an optical effect that occurs when one body is moving faster than another body and from the perspective of the faster body, it appears as if the other body is “moving backward.”  Consider you are driving and going 75 miles per hour (mph)/120 kilometers per hour (kph) and you start to pass a car going 60 mph/96 kph.  You turn to look at the driver, and from your point of view, it looks like the driver is moving backward.  That is retrograde motion.

Since we view the solar system from an Earth-centric position (your birthplace/date/time on Earth), from time-to-time, all the bodies except the Sun, which is the actual center of the solar system and the Moon, which revolves around the Earth (and not the Sun), will have periods where they “appear” to move backward in the sky.  This periodic “change in perspective” means something interesting and useful in astrological practice.  This article will look at the second Mercury retrograde of this year.

The most famous retrograde is Mercury Retrograde.  Mercury takes 88 days to go around the Sun and approximately a year to go completely through the Zodiac.  So, roughly once a year Mercury will return to the same degree and sign as your birth, known as a Mercury Return.  To give you a sense of scale, Saturn returns to its degree and sign between 28 and 29 years of your life and again at 56 to 58.  In most calendar years Mercury will retrograde three times for three weeks each time (so in 2019, from 3/5 to 3/28, 7/7 to 8/2, and 10/31 to 11/20).

Out of 52 weeks in the calendar year, 9 of them will see Mercury Retrograde.  Only 3 or 4 days out of the year account for the stationary period when Mercury is moving from direct to retrograde.  Consider that humans tend to love rare commodities or experiences, so people born during a Mercury Stationary period will be the rarest of charts.  Mercury Retrograde people will be far more common than Stationary Mercury people, but not nearly as common as Direct Mercury people (D=82%, R=17%, S=1%).

Mind the Speed Limit, Especially When Mercury is Involved!

So, what does retrograde motion mean in terms of astrological interpretation?  It means a lot of “re’s”:  relax, reflect, re-evaluate, restore, rest, recuperate, review, re-establish, retract, and so on.  In other words, slow down!!  Think of Mercury direct energy like a highway speed; in the US the top speed limit is 85 mph in Texas, and in most countries, the top speed is 140 kph (excepting famously, the autobahn, in Germany, which boasts no speed limit).  Now imagine that the highway is coming to a section where it will run through or around a major city, requiring drivers to slow down.  The need to change the speed limit to a slower speed because of a change in the energy of the surrounding area (from open to more congested) is the perfect metaphor for the meaning of retrograde periods in astrology.

How much you need to slow down will depend on the specifics of the retrograde by point and sign.  Now here’s the crucial point (emphasis mine): retrograde motion is normal; it is part of the normal cycle of planetary observation. You can do anything during a retrograde period you can do during a direct period IF YOU MIND THE SPEED LIMIT! The reason problems arise for individuals, a company, or a country during a retrograde is because they do not adjust to the change in the energy and thus DO NOT ADJUST TO THE NEW SPEED LIMIT! Imagine the kind of trouble you would get into if you are driving at autobahn speeds through the part of a city or town where a school is situated, and at a time when the school is taking in or letting out students!

Mercury Retrograde in Leo – Tone It Down!

Mercury will be in Leo when it goes retrograde this month and will work its way back into Cancer on July 19, shifting the tone in another way.  Leo energy is about performance, and with Mercury involved it can result in acting dramatically, singing loudly, and generally showing off.  With the shift from direct to retrograde there needs to be a shift in tone, downward.  If someone does not “mind the speed limit” and continues to act in a Mercury-direct-in-Leo way, the energy will feel extremely abrasive and have the opposite of the intended effect.  Instead of getting positive attention and regard, the person will get criticism and rejection.

This Mercury Retrograde will take place at 4 degrees 27 minutes of Leo, making it 5 Leo as a Sabian symbol, which is “a council of ancestors”.  The keyword is ATTENDANCE. “When positive, the degree is power through absolute self-integrity and when negative, sterile conservatism” (Jones, The Sabian Symbols in Astrology, 275).  Since Leo is largely about how we present out into the world and how people “see” us through that presentation, then during the retrograde phase we should “look in the mirror” and see if the person we are presenting is one of integrity or someone “clinging to the past”. Around us, we will also want to assess if people are acting with integrity or destructive self-interest.

As an action try to assess your “brand” out in the world.  For many of us, the easiest place to begin is by reviewing our social media presence.  What pictures and story are “out there” and associated with your name and identity?  Is it a great one, a so-so one, or a poor one?  Stop talking and listen.  Ask your friends some questions like, “who am I to you?”, “what have people said about me?”, and “if you were to use 10 adjectives, positive and negative, to describe me, which ones would you choose?”

Mercury Retrograde in Cancer – Visit the Past

When Mercury enters Cancer on July 19, this will be a great time to pull out the old photo albums and school yearbooks and explore your personal and family history.  From July 19 until August 11 (the day  Mercury leaves Cancer), it can be a perfect time to gather material and organize it (scan photos or organize them for a scrapbook) from July 19 until July 31 (when Mercury goes direct), then put together and produce something to share with others from July 31 to August 11, and then share it when Mercury gets back into Leo on August 12.

The full cycle of this Mercury retrograde does not finish until Mercury gets back to 4 degrees and 27 minutes of Leo, where it started its retrograde journey, which will be on August 15.  The time between July 31 and August 15 is known as the “shadow period”, and until a point is “out of the shadow” it will still feel the residual energy of the retrograde effect.  So, consider just showing your scrapbook to your immediate family and waiting until after August 15 to make it known to a wider audience, if you so choose.