Throughout each month transiting points create dynamic relationships with your natal chart points.  Often times two transiting points will relate to one another in a way that affects us all, depending on the points involved.  This article will look at one of these dynamics happening between two points this month, Mercury in Scorpio conjunct (merging with) Venus in Scorpio. When two points conjunct one another, they blend their energy and amplify each other.  The point of communication will merge with the point of relationship.

The Conjunction, and Mercury and Venus

This month, when the faster moving Mercury reaches 27 degrees 36 minutes (26d36m) of Scorpio, it will merge with Venus at the same degree at 6:03 pm EST on October 30th.  The impact of this relationship begins to be felt up to 3 degrees before and 3 degrees after the exact aspect and is known as the orb of influence.  When the faster moving body approaches, the aspect is said to be approaching and is building energy.  Once the exact aspect has passed, the aspect is said to be separating and is losing energy.  The duration of this particular aspect will run from October 26th to November 2nd. 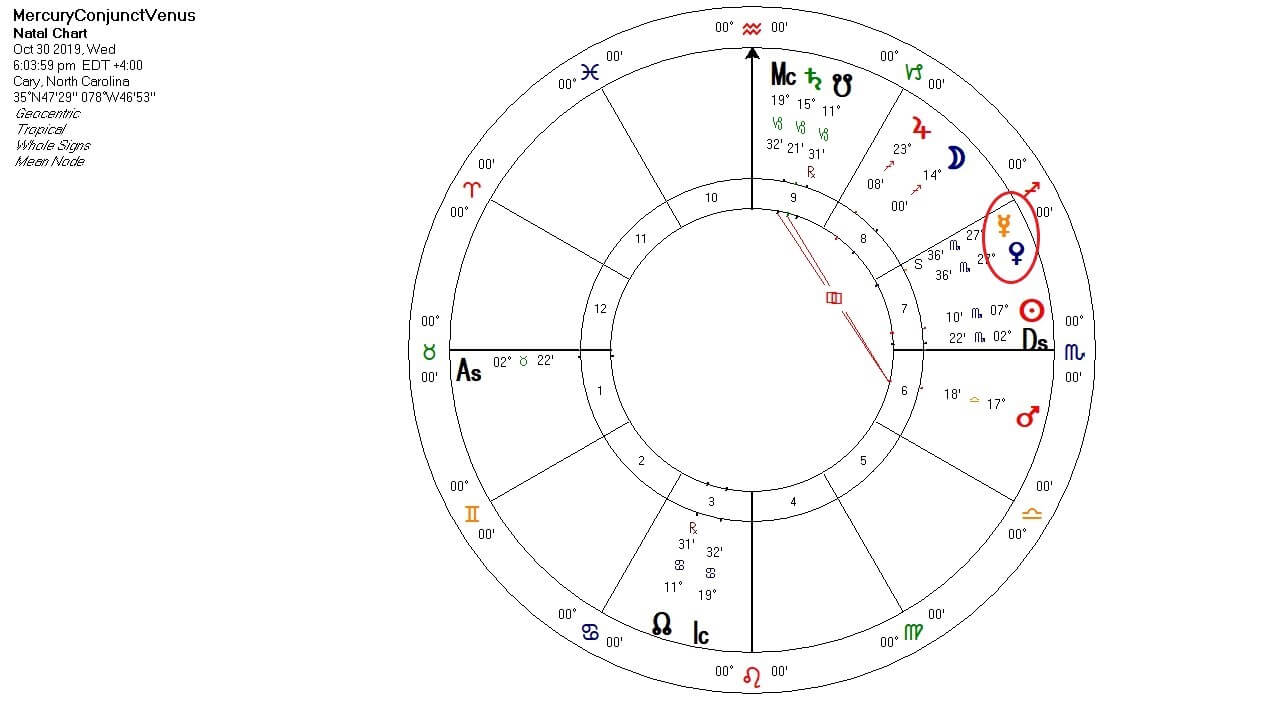 Mercury, the Messenger God, represents how we communicate, process information, and share knowledge.  He rules our way of thinking and interpreting.  His placement in the chart is quite significant, especially when asking questions about relationship; this point plays as vital a role as the Sun and Moon in our relationships. Mercury rules two signs and houses: Gemini/3rd and Virgo/6th, so he is both an air and earth sign, and therefore, comfortable in all signs and houses.

My Mercury is in Aries in my 6th House of Service, so I operate with a direct and forthright conversational style.  I prefer people to speak directly with me, and I enjoy a good argument more than most, obviously.  I tend to interpret people and situations through a lens focused on individual goals and the essential point of the conversation or situation.  Cliff’s Notes were made for Aries in Mercury.

With Mercury moving through Scorpio at this time, there is a focus on getting to the truth of the matter, keeping and revealing secrets, and some very naughty thinking.  Scorpio rules the first house of my chart, so I will be encouraged to look deep within myself during its transit, which will last quite a bit longer than usual due to it going retrograde on Oct 31 before it leaves Scorpio.

The Sabian Symbol is 28 Scorpio, “the king of the fairies approaching his domain”.  From the book, The Sabian Symbols, author Marc Edmund Jones says, “this is a symbol of the eternal promise underlying all inner self-realization since any actual fullness of life is altogether independent of the passing state of affairs in a world of time and space”.

He assigns the keyword as ALLEGIANCE. Further, he says, “when positive, the degree is a special competence of inward vision and a consequent outward perspective of high effectiveness, and when negative, capricious self-indulgence” (207).

My Venus is in Aries in my 6th House of Service, so I prefer to relate to people independently, enjoy heroic stories for my entertainment, and be quite active with regard to my health.  Venus happens to be in Detriment in Aries, which is a martial sign, meaning she does not feel at all at home in this sign. She is like a diplomat in on an army base charged and ready for conflict.  The 6th House placement helps since this is the House of Service and a feminine house. So, more like a diplomat who comes into negotiating peace after the battle has been decided.

With Venus moving through Scorpio at this time, there is a focus on the hidden issues in my relationships and how they affect me at an identity level since Venus will be in my 1st House of Identity while in Scorpio.  Venus in Scorpio deals with the darker, more intense aspects of relating to others, like seduction, power issues, and transformation through emotional and sexual intensity.

The Sabian Symbol is the same as it is for Mercury since they are merged on the same degree.

The conjunction aspect seeks to merge energies that are in the same sign; the points and sign involved need to synthesize to get the full value of the aspect.  During the period of this conjunction, the point involving communication and the point involving relating must combine, creating a great deal more than they do individually before and after synchronizing.  This merging should bring profound depth to your most important relationships, requiring you to transform them if they have become stagnant, eliminate them if they can no longer evolve, and passionately indulge them if they are healthy and strong.