Throughout each month transiting points create dynamic relationships with your natal chart points.  Often times two transiting points will relate to one another in a way that affects us all, depending on the points involved.  This article will look at one of these dynamics happening between two points this month, Mars in Libra squaring Saturn in Capricorn. When two points square “off” with one another, they seek to challenge and compete with each other.  The point of aggression will challenge the point of rules.

The Square, and Mars and Saturn

This month, when the faster moving Mars reaches 15 degrees 08 minutes (15d08m) of Libra, it will square with Saturn at the same degree, but in Capricorn, at 9:56 am EST on October 27th.  The impact of this relationship begins to be felt up to 3 degrees before and 3 degrees after the exact aspect and is known as the orb of influence.  When the faster moving body approaches, the aspect is said to be approaching and is building energy.  Once the exact aspect has passed, the aspect is said to be separating and is losing energy.  The duration of this particular aspect will run from October 22nd to November 2nd. 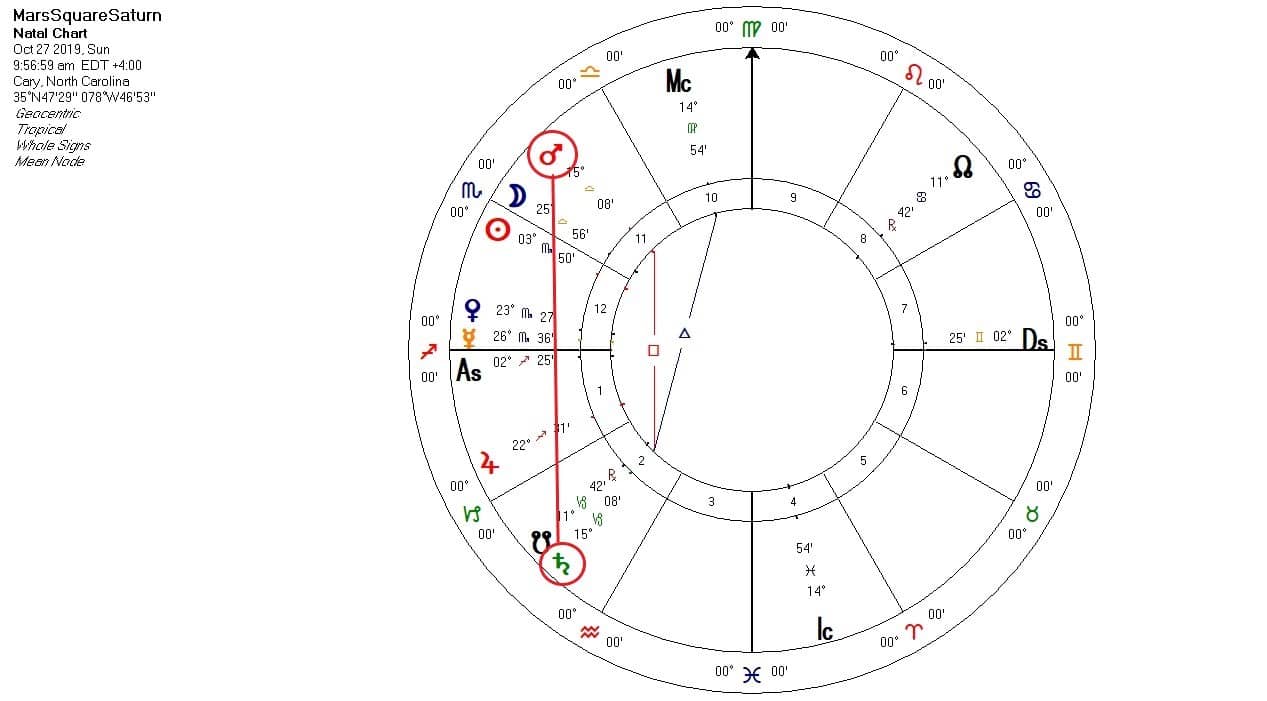 My Mars is in Taurus in my 7th House of Partnerships, so I prefer to assert myself through my actions (earth energy) and can be quite reserved with my aggressive emotions and rather slow to anger.  Mars happens to be in Detriment in Taurus, which is a relational sign and ruled by Venus, meaning he does not feel at all at home in this sign. He is like a warrior home from battle waiting for his next deployment.  The 7th House placement makes the situation even more challenging for Mars since the 7th House is also ruled by Venus.

With Mars moving through Libra at this time, there is a focus on “the sword of justice”; for a very detailed article about Mars in Libra, you can read the one I have written about Mars ingress into Libra, which happened this month on October 4th.  Suffice to say that this placement is challenging for the same reasons as Mars in Taurus; Venus rules Libra, so Mars is muted or restricted in this sign.

The Sabian Symbol is 16 Libra, “a boat landing washed away”.  From the book, The Sabian Symbols, author Marc Edmund Jones says, “this is a symbol of the superficially unfriendly relations which exist between man/woman as a person and the totally impersonal forces of nature”. He assigns the keyword as RESPITE. Further, he says, “when positive, the degree is a joy in bringing every self-competence to the recurrent emergencies of life, and when negative, frustration as an excuse for inaction” (165).

Saturn represents rules, boundaries, and the pursuit of perfection.  Saturn rules industry, administration, government structure, and business entities through the sign of Capricorn and the 10th House.  In traditional astrology, it also rules Aquarius and the 11th House of Community. Now, Uranus rules the 11th House.  It is an earth point that is the outer boundary of planets that can be seen with the naked eye.

My Saturn is in Aries in my 6th House of Service, conjunct my North Node.  Saturn is in its Fall in Aries because Aries wants to be free and independent and Saturn is all about the rules.  As a result, I can either be a constant rule breaker or find a way to be self-disciplined so I can live by my own rules while not causing so much disruption that the Saturn energy of the world around me feels the need to apply restrictions.

With Saturn moving through Capricorn at this time, the entire planet is going to have to “face the music”.  Both Capricorn and Saturn are all about consequences.  Whether rules are upheld, which is the preference with Saturn here, or they are broken, by the time Saturn completes its journey, which started in December of 2017 and will end in early 2020, consequences will be pretty clear.

The Sabian Symbol for Saturn at the time of the Square is 16 Capricorn, “boys and girls in gymnasium suits”. Jones says, “this is a symbol of practical experience as at root a matter of developing self-competency, and of life as a never-ending adjustment of ideas and motives to the everyday potentials of human society”.

The keyword is ANIMATION.  Further, he says, “When positive, the degree is an effective appreciation of joint action and high skill in supervising group effort, and when negative, self-betrayal through unimaginative conventionality” (255).

The square aspect seeks to challenge energies to force growth; points “encounter each other” from disparate elements, in this case, air and earth.  During the period of this square, the point involving aggression and the point involving control will “have at it”! This square can get rather testy since one point wants to do what wants and the other point expects everyone to do what they are supposed to do, as defined by that point (Saturn).

The very challenging nature of this aspect, with these points, will come from the fact that Mars will be operating with righteous (Libra) anger (Mars).  Saturn will want to keep things as business as usual, which will only aggravate the Mars energy, which is trying to wake Saturn up.  If revolt is required to awaken Saturn, so be it!

Growth will not be achieved through cooperation; someone will win and someone will lose.  If Saturn loses, then Mars will assert a change and require Saturn to make rules for the new change.  If Mars loses, then Saturn will put Mars in a deep hole of a cell with no key unless Mars agrees to conform.

9 Easy Ways to Meet and Know Your Guardian Angel