This article will look at one of these dynamics happening between two points this month, Mars in Scorpio opposing Retrograde Uranus in Taurus. When two points oppose one another, they seek balance.  The point of desire and aggression will seek balance with the point of revolution.

The Opposition, and Mars and Retrograde Uranus

This month, when the faster moving Mars reaches 3 degrees 32 minutes (3d32m) of Scorpio, it will oppose Uranus at the same degree, but in Taurus, at 11:25 am EST on November 24th.  The impact of this relationship begins to be felt up to 3 degrees before and 3 degrees after the exact aspect and is known as the orb of influence.  When the faster moving body approaches, the aspect is said to be approaching and is building energy.  Once the exact aspect has passed, the aspect is said to be separating and is losing energy.  The duration of this particular aspect will run from November 20th to November 28th. 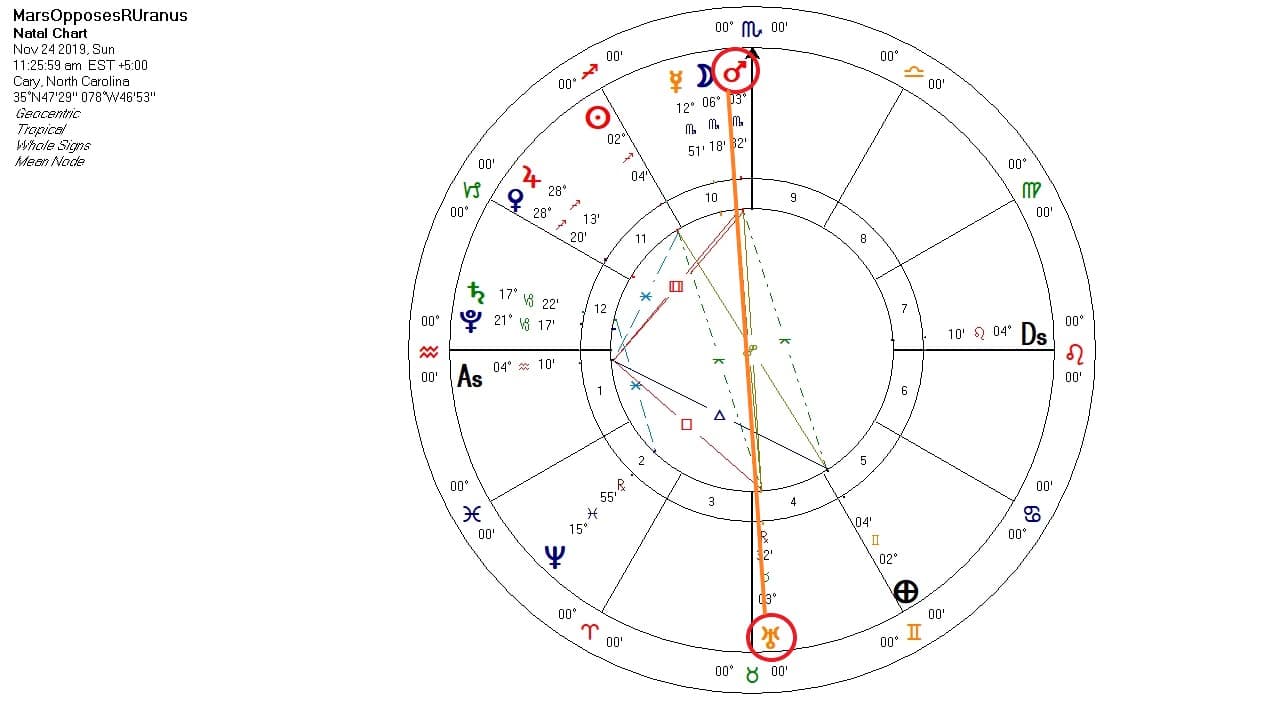 With Mars moving through Scorpio at this time, there is a focus on “intense passion”; for a very detailed article about Mars in Scorpio, you can read the one I have written about Mars ingress into Scorpio, which happened this month on November 19th.  Suffice to say that this placement is very intense and hard-driving since it is in a sign it once ruled.

The Sabian Symbol is 4 Scorpio, “a youth holding a lighted candle”.  From the book, The Sabian Symbols, author Marc Edmund Jones says, “this is a symbol of true contact with inner and transcendental realms of reality, and of the rewards to the spirit which come from a realization of the continuing ties between the least of individuality and universal life as such”.

He assigns the keyword as RELIANCE. Further, he says, “when positive, the degree is an unquenchable and irresistible confidence in the goodness and integrity of all things, and when negative, a simple-minded impracticality if not a very unhealthy self-obsession” (185).

With Uranus moving through Taurus at this time, the entire planet is going to be dealing with some radical changes related to the earth (Taurus), and resources that impact daily life (Taurus rulership of the 2nd House of Resources and Security).  We can expect new innovations (Uranus) from its time in Aries, that make it into Taurus, to become part of the “everyday life” (Taurus). And also, aspects of everyday life (Taurus) will go through some radical changes (Uranus).

The Sabian Symbol for Uranus at the time of the opposition is 4 Taurus, “the rainbow’s pot of gold”. Jones says, “this is a symbol of the true incentives of an outer and physical world, and of the rewards which are guaranteed by an eternal covenant between the least of individuality and the universal matrix of life itself”.

The keyword is FAITH.  Further, he says, “When positive, the degree is an inner assurance which enables man to hold steady in every course of his choosing, and when negative, a loss of all opportunity through futile expectation and an unintelligent wandering off in the quests of pure fancy” (182).

The opposition aspect seeks to balance energies that are in opposite signs; the points and signs involved need to harmonize to get the full value of the aspect.  During the period of this opposition, the point involving desire and aggression and the point involving revolution and radical action must find a balance, creating collaborative energy between Scorpio transformation through intense power shifts and Taurus stability through long-held traditions.

This opposition will certainly be mixed since Uranus, as a change agent, will appreciate Scorpio while Mars, which rules Aries, will resist and try to break through Taurus stability and conservatism.  The very challenging nature of this aspect, with these points, will come from the fact that Mars and Uranus relate to maverick energy that is not very comfortable dealing with or in the fixed energy of Taurus.  If there is an important desire during this transit, the urge to break the rules and satisfy it will be greater than following the rules.

The best use of the Mars energy would be to be direct the energy into isolated actions that do not harm others or to make sure your actions, should the consequences have an impact on others, have proper support.  If you decide to go skydiving, make sure your insurance policy is up-to-date so you do not leave your family stranded in a probate battle or unable to get the needed money.

The balance is achieved by accepting that there is a good chance you will want to be reckless and take risks under this transit.  If so, do your best to minimize negative or disastrous consequences.  You will feel the need to force change (Mars in Scorpio) which will radically redefine “your normal” (Uranus in Taurus) in order to get to a new normal that is better aligned with your evolving soul.