Ingress occurs when a point moves out of one sign and into another sign. This transition results in a change in tone and meaning for the point, which is an energy shift designed to promote and continue growth on a regular and ongoing basis.  Each point moves at a different speed, so the ingress for Mercury, which is faster than Mars, happens more frequently (mostly every 3 to 4 weeks) while the ingress for Pluto happens much more slowly (after a decade has passed).

This article will look at the ingress of Mars as it leaves Virgo and enters Libra.  The change in tone involves leaving the mutable earth sign to enter the cardinal air sign of the Zodiac.  Energetically, it will be like leaving the practical tools for succeeding at work to pick up a sword to dispense justice.

On October 4th Mars will leave Virgo and enter Libra at 12:21 am eastern standard time. Mars is the point associated with our desire, passion, aggression, and action.  In Virgo, the “tone” is tied to how we provide service and solve problems.  In Libra, the “tone” will be shifting to analysis, relating to others, and decision-making.

In Libra, Mars, a fire point finds itself in the cardinal energy of air, which rules with the scales of justice.  As the point of masculinity, this journey through the sign ruled by Venus, the point of femininity, can be quite challenging for both point and sign. 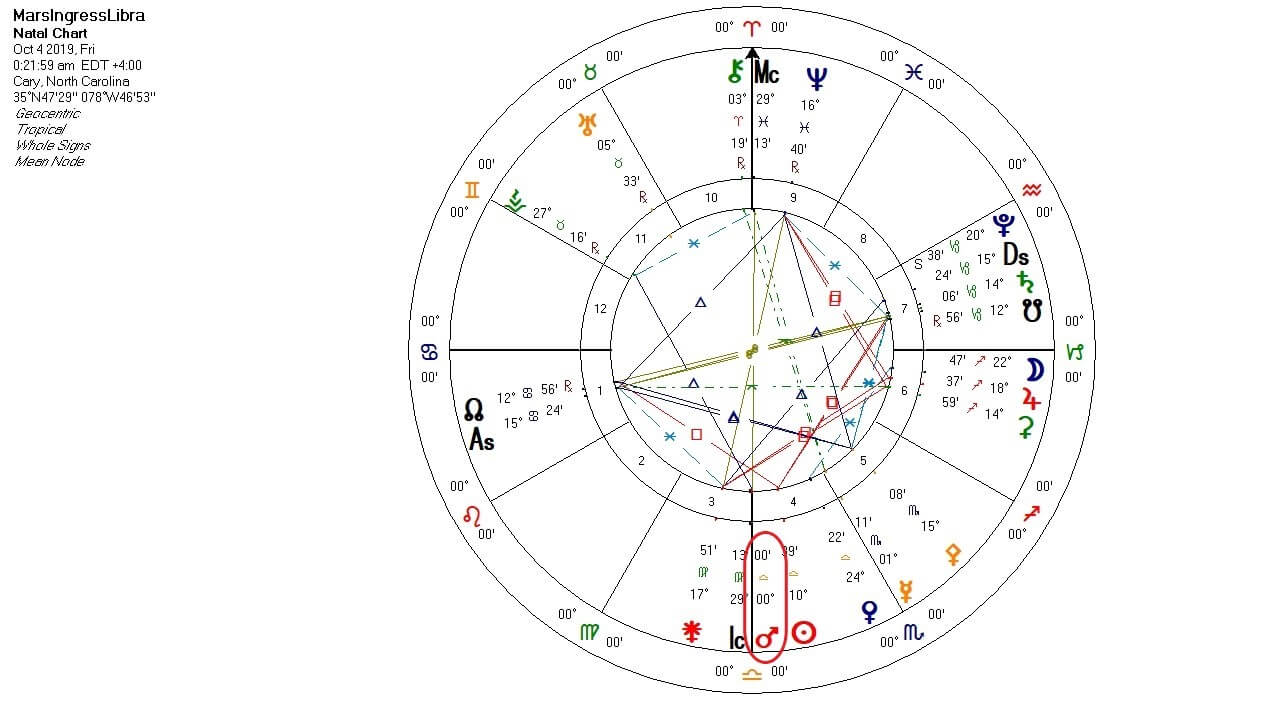 Perhaps one of the best ways to think of Mars in Libra is to think about the role of a general in the military or coach in a competitive sport.  Libra is the sign that rules judgment; it is the detached energy of relationship based on contracts and the rule of law.  Martial energy in Libra is the police force or the military, martial energy directed by rules and released or used when a decision must be enforced.

As Mars moves through Libra our desire to act will be guided by logic, the way a governor on an engine to keep it running smoothly when it might otherwise speed up and overheat.  It can also act as a control mechanism to limit the maximum speed of an engine to prevent it from going out control when someone using it might try to push it beyond safety limits.

The ingress moment of entry in a Whole Sign astrology chart is always the 1st Sabian Symbol of the sign.  In this case, our point of desire will enter Libra 1, which is “a butterfly made perfect by a dart through it”.  In the Sabian Symbols book, by Mark Edmund Jones,

he writes, “this is a symbol of completely unconditioned potentiality, as this may be grasped on the imaginative side of life.  The keyword is ARTICULATION.”

Based on the date, time, and location of my birth, the 12th House is ruled by Libra, so Mars will be entering my House of Spirituality on October 4th.  It will travel through that part of my chart from October 4th until November 19th urging me to act with integrity and stand up for what I believe in if challenged or if I need to make my position known on important subjects.

Additionally, I have two key points in this area of my chart; my Moon and my South Node.  These appear late in my chart, at 21 degrees and 18 degrees, respectively.  It is very possible that I may have to address “martial” issues relating to my feelings (Moon) and my spiritual lessons (South Node).  I may be called upon to act as a “policing” force in my closest (Moon) relationships (Libra).

When points move through our houses, they bring their unique energy to bear on that area of our lives, both as an emphasis in our own inner development and with external triggers.  This particular transit of Mars will be highly personal and distinctly impersonal because my Moon is involved (inner feelings) and my 12th House (sense of life purpose).  For you, it might be doing its work in the area of your career (10th House), or family (4th House), or community (11th House). Wherever it is entering that sign in your chart, you can expect some need for strong actions (Mars) based on logical or detached decision making (Libra).

The Sword of Justice

In their book Astrology, the Divine Science, Marcia Moore and Mark Douglas give Mercury in Scorpio the following keynote: “diplomatic action is backed by a show of force” and the symbol is: “an officer at full-dress parade salutes his smartly uniformed troops” (127). During this time everyone will be attuned to a possible need for action based on certain decisions or the rule of law.

Expect yourself to be more willing to call upon aggression or power if you feel you are justified in doing so.  While Libra often gets a reputation for indecisiveness, that is but the shadow of its true energy.  Fully realized Libra energy is decisive and unafraid to pass judgment.  With Mars present, there is even greater energy to act on those judgments to shape policy and relationships.