Astrologically speaking, this year is extremely dramatic.  Jupiter, Saturn, and Pluto conjoined in January 2020, indicating a tremendous period of upheaval, testing our beliefs (Jupiter), our structures (Saturn), and our very lives (Pluto).  Uranus began its journey in Taurus at the end of 2019 (December), indicating that everyday life would be “shocked” until 2026.  Chiron entered Aries for wounding and healing work around our independence.  And Neptune continues is long march through its own sign, Pisces, awakening all of humanity to spiritual issues.

Mars transits a sign in roughly three months.  And thanks to its orbit and relationship to the earth, it can go a whole year without turning retrograde.  However, this year will include a retrograde phase, which will happen late in the degrees of Aries.

Mars entered Aries on June 28.  Its prior time in Pisces challenges its energy.  Since it prefers to act and Pisces is a sign often associated with confusion, the time spent in Pisces can be very frustrating, especially if clear directions in life do not present themselves or circumstances do not allow for consistent predictability.  Action, in a sense, ends up “all over the place”.

When Mars goes into Aries, it will be in its sign of rulership, making it as strong as it can possibly be.  Keep in mind that Mars represents desire, aggression, passion, and violence.  The world is very unstable, and Mars is more than ready to act in its own sign.  Unfortunately, this placement and the duration it will be there, June 28th, 2020 to January 7th, 2021, means that volatility will increase rather than decrease.

The retrograde phase will start on September 9th and conclude on November 13th, meaning it will occur in the intense period leading up to the US election and the likely problematic maintaining or transferring of power, regardless of the winner and loser.  Stability is unlikely until Mars enters the fixed and plodding energy of Taurus.

With Mars Moving through Aries it will be in a position, first by sign, and later by degree, to square Jupiter, Saturn, and Pluto, so there really is no immediate end to the volatility we are currently experiencing worldwide, nation-wide, and personally.  Changes will happen dramatically and explosively with Mars in Aries.

Impact on the United States Chart

While the entire world is getting “tuned up” by the virus, the US is getting “taken to the woodshed”, which is an idiom for receiving punishment for something you have done wrong, and it implies a harsh punishment, usually through a beating. 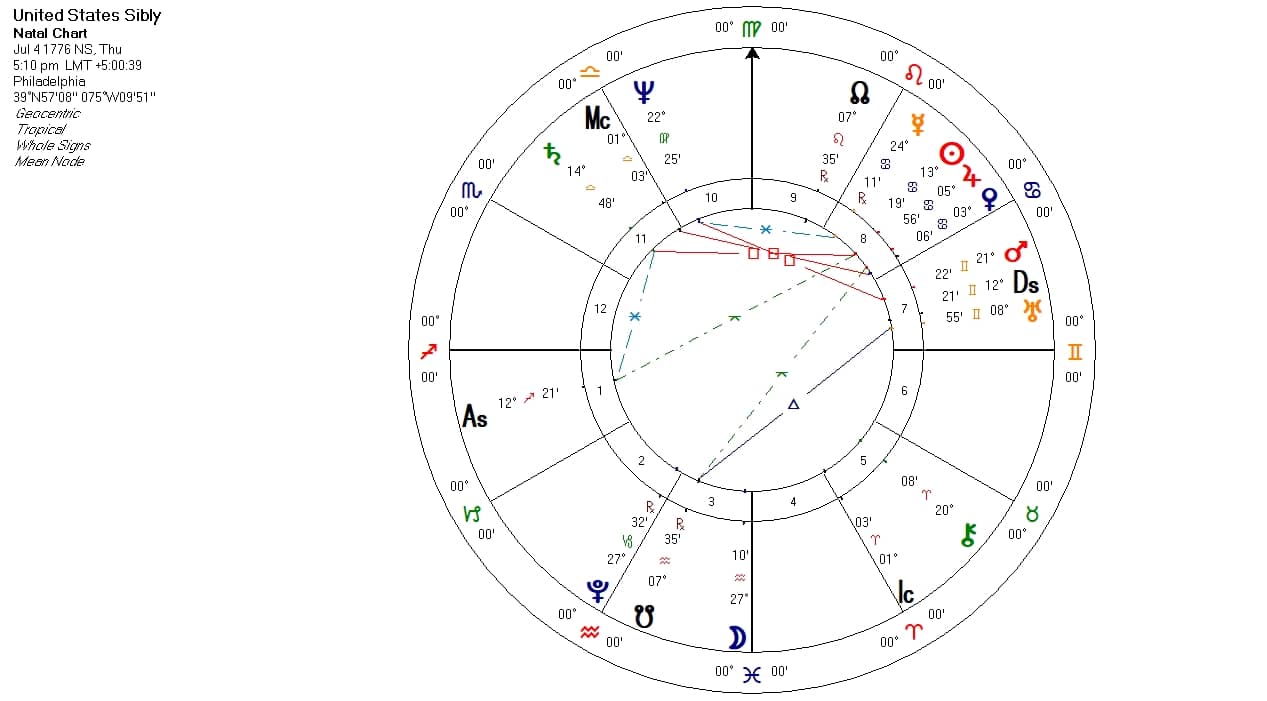 Sadly, anger will be everywhere and on high volume, conflicts will happen in both private and public spaces at high numbers with significant intensity until Mars leaves its own sign and stops making hard aspects to nearly every point in the US chart.  The real question of this transit, coupled with all the other transits and retrogrades, will be … can the US hold it together and focus its anger and frustration into a positive direction for substantial and lasting positive change.

Whatever emerges from the Aries period into the Taurus period will become the established energy until Mars cycles back around to Aries two years from when it most recently passed through the sign (so 2022).  It is not impossible to imagine martial (Aries) law/rules (Taurus) in daily life (6th House) in January of 2021 if the disruptions of 2020 lead to social unrest that tears the fabric of US society asunder.  War is not out of the question.

It is possible you may be one of the angry people ready to act or you may be someone hoping to stay safe and out of conflicts.  Regardless we will all have to deal with Mars in Aries energy for over 6 months, along with powerful transformative energy from other points teeing humanity up for a crushing swing from mother nature and spirit.

If you are ready to act, the energy of Mars in Aries will more than have your back.  However, Mars energy can do as much or more harm than help because it tends to be undisciplined.  Protesting with the size and force of clear and controlled anger or frustration can bring far more lasting and permanent change that looting and unfocused “Mars-driven” destructiveness.  If the energy can be channeled in a constructive direction, a lot of change can be done very quickly and effectively.

If you are a peacemaker or negotiator, try not to be naïve during this transit.  Do not bring flowers to a “gunfight” unless you plan for them to be on your grave.  And if there is a “gunfight” coming to you, you will want to decide if you have to stand up for yourself, agree with the aggression and take up the fight, or can flee to a safer location.  There will not be much middle ground, room for equivocation or “fence-sitting” allowed.

First Quarter Moon
The moon is currently in Aries
The moon is 5 days old
Close
We use cookies to give you the best experience. Continuing using this site we assume that you are happy with it. Ok