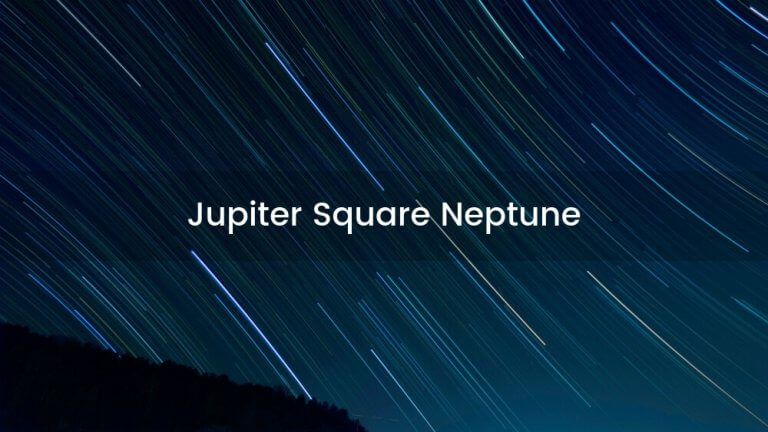 This article will look at one of these dynamics happening between two points this month, Jupiter in Sagittarius squaring with Neptune in Pisces. When points square, they are in a challenging aspect, which forces growth or causes painful disruption.  The point of expansion will be challenging and challenged by the point of spirituality and the unknown.

The Square, and Jupiter and Neptune

This month, when the faster moving Jupiter reaches 16 degrees 59 minutes (16d59m) of Sagittarius, Neptune will retrograde back to the same degree in Pisces.  This 90-degree angle between the two points is called a square. The angular relationship between two points is known as an aspect.

The impact of this relationship begins to be felt up to 3 degrees before and 3 degrees after the exact aspect and is known as the orb of influence.  When the faster moving body approaches, the aspect is said to be approaching and is building energy.  Once the exact aspect has passed, the aspect is said to be separating and is losing energy.  The duration of this particular aspect will run from August 21st to October 12th.

Jupiter represents how we expand, what we believe in, and where we see and accept authority.  Where Jupiter resides in your chart reveals the nature of your belief system and how you prefer to explore and expand in the world.  My Jupiter is in Leo in my 10th House of Career, so I tend to want to expand and perform as a way to earn my living.  I have been a university instructor and now, very often, do work at public events as part of my job to earn my income.

With Jupiter moving through Sagittarius and my 2nd House of Personal Resources, if I manage my work and investments correctly, I will have an opportunity to really expand what I have.  Globally, there is a tremendous opportunity for large scale expansion, but also, from the shadow energy, the rise of totalitarian ways of thinking and acting.  Expansion can be achieved through trade or invasion, depending on the actions and choices of leaders during this transit.

Neptune represents the unconscious, the mysteries of life and the universe, surrender, and spirituality.  The monarch of the oceans rules dreams, illusions, the interconnectedness of all living energy, and the collective conscious.  Where Neptune resides in your chart reveals the mystery your generation and you, yourself, must try to solve.

My Neptune is in Scorpio, along with people born between 1956 and 1970, so we are wrestling with the mystery of power and sexuality, death and rebirth, and profound emotional transformation.  Neptune resides in my 1st House of Identity right next to my Ascendant (how I am seen), so it is little wonder that I play a role in life as a spiritual advisor.

With Neptune moving through Pisces at this time, and since 2010, I feel its effects in my 5th House of Creativity and Self-Expression.  I am wrestling with my spiritual understanding of my own creative energy and actions.  Globally, we are all getting awakened spiritually because Neptune is moving through the sign it rules. There is a great, global shift in consciousness happening during this transit.

Square aspects are challenging; the points involved challenge one another in order to facilitate growth in some spiritual way through the discomfort.  In other words, no one gets their character tested when things are going their way.  During the period of this square, the point involving belief and expansion and the point involving the unknown and spirituality will be in a tense alignment at the 16th degree of Sagittarius and Pisces.  Authority and the greater good are going to be at odds.

Sagittarian authority energy will be “squaring off” with Pisces deeper truth energy.  We will likely be coming to terms with two very distinct visions (Jupiter) in leadership to address the global issues we face on every front of existence – the environment, trade, migration and movement of people, government, and food/water.  We will either rise to the occasion and meet the truths with compassion or we will try to assert our will fruitlessly and dangerously against the “rising tide”.

This tension is no small matter because of the points involved are in the signs of their rulership.  In fact, in classical astrology, Jupiter ruled Pisces.  Once this transit is done, we may feel, in our souls, that everything must change, and will change.  Will we be able to flow with the change, surrender and accept as Neptune tries to teach us?  Or will we embrace the shadow of Jupiter, which is arrogance and willful ignorance in the face of a truly changing reality brought on by Neptune’s immense energy while in its own sign.

The Global Scale Made Personal

These two points are powerful energies designed to address the “big picture”.  They are both moving through their “signs of power”, and they are “facing off” against one another.  Neptune is the greater point and “plays the long game” because of its slower and more persistent movement.  It takes approximately 17 years to move through a sign while Jupiter takes approximately 1 year.

Pisces is actually a sign known for crisis, delusion, addiction, and fleeing reality because something about it is overwhelming.  The world has rapidly expanded, in terms of interconnection, which has also made it “smaller” and more vulnerable to impact and action by humanity.  Individual choices have accumulated to a scale that is becoming impossible to ignore and will likely require a fundamental change in belief, that will not be at all easy to see.  In other words, we have to “turn the ship” before (Neptune/Pisces) we see the iceberg (Saturn/Capricorn) to make a decision that can save lives based on a greater understanding than merely what is in front of us (Jupiter/Sagittarius).  Once you can see the iceberg, no matter how far away you are, you cannot avoid hitting it.