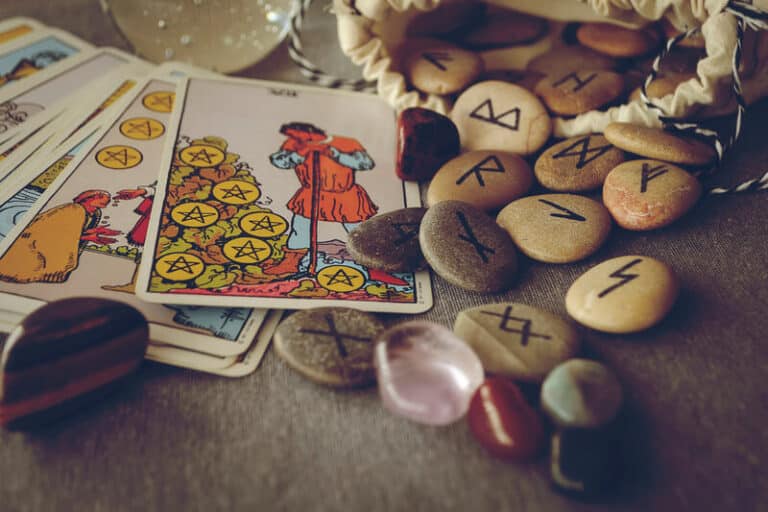 This is a broad, general reading, painting a picture of the mood and dynamics in the coming month, accessing the Tarot’s hints and guidance for what we may see and hear, or find ourselves navigating in August 2022.

Today we are using the Legacy of The Divine Tarot by Ciro Marchetti, 2009, publisher Llewellyn U.S.

Keynote card: The Knight of Wands 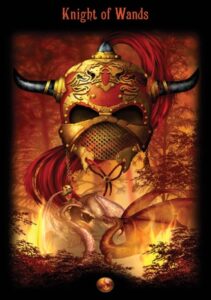 This card has made repeated appearances. This is not surprising at this time of year. The fire suit card of the Knight of Wands correlates with the zodiac sign of Sagittarius the Archer, and with the Ninth House of the Zodiac, representing heat, higher learning, and long-distance foreign travel.

August is the peak season of long-distance foreign travel, while a series of exceptional heat waves is forecast for many parts of the northern hemisphere during August. This card may also talk about solar flares, seismic or volcanic activity, though these are not necessarily severe.

This high-energy fire suit card is a mood booster. It talks about meeting new people, going to new places, and trying out new activities. It is a card of action, noise, color, and sudden arrivals and departures. It may mean a new admirer, but this may be a short chapter, and this person may disappear as suddenly as they appear.

Less commonly talked about, Sagittarius the Archer represents a spirit of inquiry, higher learning, study, exploration, philosophy, and also prophecy, visions, and psychic experiences. We may notice vivid or even psychic dreams or waking experiences, usually minor, but interesting to observe when they occur.  We may be looking into new studies, or signing up for a new course. 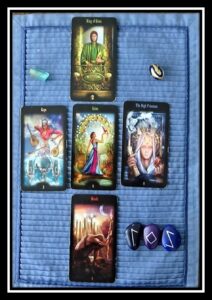 Central:  Priorities in the current situation, The Nine of Pentacles.

Of the five cards we have drawn in this elemental spread, we have drawn two Pentacles cards in leading positions- the top and central cards, The King of Pentacles and the Nine of Pentacles. August is dominated by a collective focus on economics, borders, and security.

The King of Pentacles 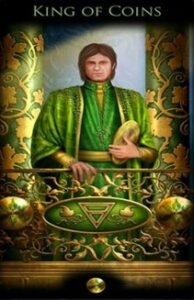 The King of Pentacles correlates with the zodiac sign of Taurus the Bull. This is money, banking, and agriculture. This is governments and institutions. This is Wall Street and the Stock Exchange. These cards are indicating that economic, financial work, and practical matters affairs loom large in August on the world stage and close to home.

The King of Pentacles is one of the cards in the Tarot that specifically talks about agriculture. Food security will be a hot news topic in August as we enter harvest time towards the end of the month. Especially in view of the illegal Russian exports of Ukrainian grain and the blockading of Black Sea ports. Recent talks between Russia and Ukraine, brokered by President Erdogan of Turkey, may offer a glimpse of hope in August.

Who else might this figure represent in real life? One look at this card says Japan and this card also personally represents Shinzo Abe, former Japanese Prime Minister, who was sadly, recently assassinated on 8 July, in Nara Nara, Japan.

An election held two deaths after his death was supported by a far higher than expected voter turnout, by voters who saw his assassination as a threat to democracy in Japan.  One consequence of the resulting victory for the Liberal Democrat coalition in Japan may be that in death Shinzo Abe achieves something he campaigned for in life- the historic repealing of Article 9, a pacifist clause in the constitution of Japan signed in 1947 after the end of WW11.

Article 9 of the Japanese Constitution

Aspiring sincerely to an international peace based on justice and order, the Japanese people forever renounce war as a sovereign right of the nation and the threat or use of force as means of settling international disputes.
(2) In order to accomplish the aim of the preceding paragraph, land, sea, and air forces, as well as another war potential, will never be maintained. The right of belligerency of the state will not be recognized.

Repealing Japan’s Article 19 would be a great of great historical significance with wide-reaching implications. In August 2022, we will see Japan working in an ever closer alliance with the US, UK, and other partners, China’s recent agreement with The Solomon Islands which means that, in theory, China could station military forces there on a permanent basis, less than 2000 km from Australia, with an estimated flight time of 3.6 hours- or possibly only 90 minutes for a fighter jet. Japan and Australia signed a historic new Defence Pact January 2022.

The King of Pentacles is a money man, a hard worker, and a responsible provider; we may be discussing money, dealing with a husband, father, employer, colleague, close relative or friend. Often he will be a Taurus, Capricorn or a Virgo subject. He tends not to be too demonstrative, and sometimes he does not always get the credit he deserves. But his devotion is real and sincere, while this card is an encouraging sign for those looking to make a change of job this month.

The Nine of Pentacles 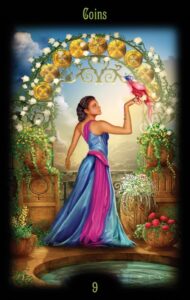 The Nine of Pentacles correlates with the zodiac sign of Virgo, and embodies Demeter, the classical goddess of the harvest. Life is not always fair. We do not always reap what we sow. Russia is currently reaping the crops that Ukraine had sown. But we can’t reap what was never sown. What new seeds do we sow at this time?

This central card is about comfort achieved through hard work. This person has worked long and hard for what she now enjoys. But it has not come quick, and it has not been easy. There were no shortcuts and no easy fixes. She can be very proud of what she has achieved. Excellence is what matters to her. It’s a matter of personal pride, that she does things the best way they can be done even if no- one else is watching. She does what needs doing for its own sake.

There is immense self-discipline here, willpower, determination, courage, and stamina. We are being invited to consider or review our long-term hopes and goals. Where are we heading on our current path? What harvests might it yield? Enough to get by, or do we need a new plan?

The Three of Cups 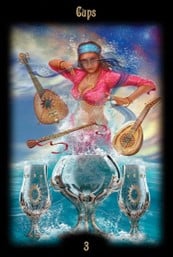 This is the card of ‘wine, women and song’, and like The Knight of Wands, is a promise of cheerful times for many of us in the coming weeks of high summer: happy gatherings, relaxation, friends, and family time. This is peak wedding season, and the Three of Cups talks about news of engagements or pregnancies.

Referring back to the King of Pentacles card and the central Nine of Pentacles, was a recent change to the payments of National Insurance which meant that from 6 July, workers will be able to earn £12,570 a year before they have to start paying NI – up from the previous threshold of £9,880. The former Chancellor of the Exchequer, Rishi Sunak, and a King of Pentacles ‘Money Man’ is incidentally, himself a Taurus subject, born 12 May 1980.

The Nine of Wands 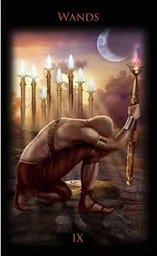 The Tarot has indicated throughout, whether rightly or not, and how soon only time will tell, that Ukraine will survive as a sovereign state, but smaller, and that President Zelenskyy will personally survive Putin’s death squads.  Losing the Donbas would be a bitter blow should it come to that. Russia’s victory in this scenario would fall far short of Putin’s true ambitions.

The West’s resolve could be severely tested once we get to winter, and Putin’s leverage really starts to bite in respect of energy supplies. Will the West walk that walk, if that is what it takes to defeat Putin’s aggression, which if not checked in time, could spread far beyond Ukraine? The Nine of Wands card correlates with the date range 23 November-21 December. This is when we may find out the answer to that question.

This card says that if we are struggling, if we are fighting, then we take a breather and get ready to give it one final push. The last two years have been peculiarly demanding. We might be feeling worn out from struggle. We can put our feet up this month and have a breather, and that will do us the power of good, and recharge our batteries. Keeping it simple is best. Sometimes, when the going is really hard, the best thing we can do is just take it one thing at a time, one day at a time. 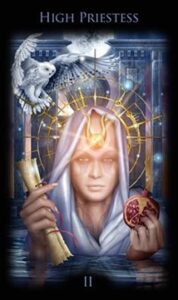 There are times when we need to take action. There are times when it is wiser to watch and wait. Deciding which can be tricky. Act now or wait and see? The High Priestess gets ready to act but for now, she watches, waits, chooses her words and her confidants with care, but she also listens to her hunches, her gut instinct or her intuition.  We may be handling a situation where it is a case of ‘fools rush in where angels fear to tread.’ The advice of this card is, if in doubt, we stay quiet and keep our own counsel.  Sometimes it is a case of least said, soonest mended, and much as we may want to help, other people need to figure things out in their own way.

Alternatively, we ourselves may be seeking out the useful advice of a ‘High Priestess’ this coming month. She may be a professional adviser, a specialist, a teacher, counselor or a mature and trusted –usually female contact.

Below the cards in the picture, you will notice three stones. These are Old Norse runes read left to right; Laguz, Ing and Sowilo, Flow/Water, Heat and Sun.

While some parts of the world experience heat waves, in other parts of the world floods or major maritime events may feature in the news. On a personal level, this rune says still waters run deep, relationship matters come to the fore. We may learn a secret. We may experience vivid dreams or have psychic insights this month. The Norse peoples used the color blue to soothe the mind against nightmares. This is a wonderful rune for creative and artistic projects- we’re in full flow.

This is a strongly positive masculine rune of drive, energy and fertility. This rune may be talking about meeting someone new, or starting a family, or is detecting a surge of energy that can really get things done this month despite recent setbacks, except perhaps in the kind of situation we discussed when talking about The High Priestess. Ing is a positive rune of recovery from illness.

This is the sun rune, a happy, positive rune that promises better times ahead. It is a good omen for the successful launch or completion of a project. This could also mean successful job hunting if we’re looking for a change of job. This is a rune associated with Vitamin D. Again, this is a powerful rune of health, healing and recovery. Sowilo may bring a moment of clarity that cuts through confusion. We may see a new way ahead, or have some other kind of ‘aha!’ moment, a brilliant new idea or inspiration.

Best wishes for the best and brightest month ahead in August 2022.