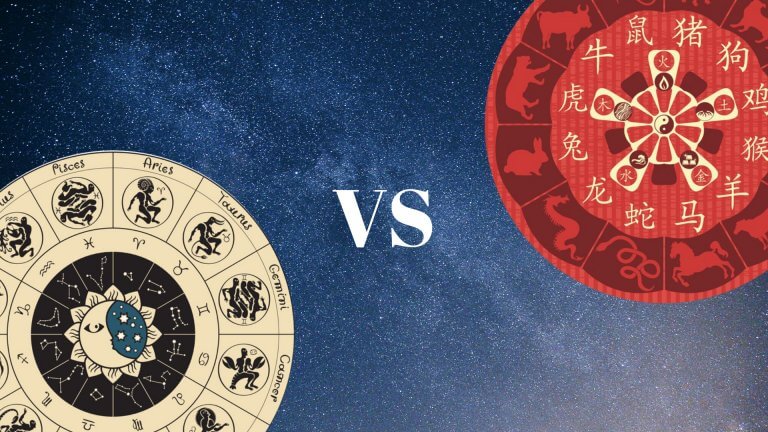 Have you heard of Chinese horoscope? This is the counterpart of regular western astrology that you might be so fond of. In simpler terms, what is seen as sun astrology in your part of the world, with the 12 zodiac signs, is a totally different ball game in the eastern horoscope? Let us get on with it and familiarize you with the basic difference between the two.

China can probably very easily be called the oldest civilization in all the east, after the Indus Valley civilization. With that being said, while the Indus valley people were great town planners, the Chinese were equally great at spiritual knowledge. All of this eventually became the Chinese horoscope. It is the most widely known among all eastern horoscopes, and the most widely trusted.

1st – Western Horoscope and the theory behind Sun Astrology

The astrological terms you are quite familiar with are all western ones, based on sun signs. These sun signs are the ones you commonly remember as Leo, Sagittarius, and Pisces et cetera. The western zodiac banks on the movement of the planets among various constellations, and then translating those movements back in relation to the earth. This western horoscope process is divided over twelve calendar months, with the sun signs changing every month. There are a couple of primary differences that we will be outlining on this page.

For starters, there are 12 zodiac signs, namely Aries, Taurus, Gemini, Cancer, Leo, Virgo, Libra, Scorpio, Sagittarius, Capricorn, Aquarius, and Pisces. However, the eastern zodiac is quite different from this. Where this talks about star signs and their subsequent personality influences, the eastern zodiac talks about specific years and how they will turn out to be for a person.

When we talk about Chinese horoscope dates, we are about to give you news that you might not be expecting. The truth to it is, while western astrology works over a period of twelve months, Chinese horoscope takes a total of twelve years to circulate completely.

In that sense, the Chinese zodiac prediction charts are made too. While western astrology talks about each sign giving a person special personality traits that will be helping them in their life, Chinese horoscope mentions the year and how it will go for a particular person. The basic difference here is that of the approach, in which the Chinese zodiac prediction takes a different turn.

This is quite interesting to know since the Chinese zodiac signs are not named after gods or planets, but instead, take inspiration from animals. The Chinese culture believes that humans are most closely related to things that surround them and take their shape in terms of behavior and personality. There are twelve animals that come into this list, which are namely rat, ox, tiger, rabbit, dragon, snake, horse, sheep, monkey, rooster, dog, and pig. They are successively known in the Chinese calendar as the year of the pig in 2019, and so on.

4th – Bringing in the Celestial Bodies

As you do already know, the basics that every form of astrology derives itself from are those from the celestial bodies. These include the sun, the moon, as well as all the planets. Chinese horoscope and Western astrology both differ in their parent celestial bodies too. Chinese astrology is effectively based on the lunar year, and thus requires its astrologers to keep track of the movement of the moon.

In contrast, all Western astrology signs are called sun signs, making the sun their parent celestial body. We mentioned earlier how the Chinese horoscope has years instead of months associated with their signs. You may wonder what their months are called then. The answer is simple, their months are just numbered, and called whatever they are called in your regular calendar.

5th – Bringing the numbers up against Chinese Horoscope and Western Astrology

The Chinese culture approves the use of decimal-based calendars, even when they are in the west, along with the basic twelve-year calendar that hosts the Chinese horoscope. Chinese astrologers use both calendars to get even more factual correctness in their answers. Western astrology uses the simple 12 months calendar.

6th – Elements in the mix of Chinese Horoscope and Western Astrology

Let us get straight to the point over here. There is a total of four elements in the Western astrology. These are earth, fire, water, and air. In western astrology, these tend to form the very basis of the personalities of people. Earth means that these people favor permanence in their life and want to settle down. Fire means a person has great energy and conviction and will do anything that they set out to achieve. Water means these people are very adaptable, while air means a person is full of energy and free will and want to explore everywhere they can get to.

The Chinese horoscope plays this game a little differently. It does not have the air element and instead replaces it with two other elements, namely wood, and metal. Wood talks of how there are soft natured people in this world, while metal talks of people that are a hard nut to crack.

Western astrology and Chinese horoscope do tend to have their own differences, but these go on to each highlight their own pros. Western astrology tends to be serving the western communities, while Chinese horoscope has a higher fan following in Asia. Sociological and cultural differences are the primary cause of this, and thus cannot let one or the other form of future predictions be superior to the other one.